I met Larry Heinemann when I was a student in the graduate creative writing program at Columbia College Chicago. He was THE author in the program at the time, published by a major New York house, agented, and critically acclaimed for his first novel, Close Quarters, a gut-wrenching story about the Vietnam War. Larry fought in the conflict 1967 to 1968 and then returned to his native Chicago, where he began his writing career. In the 1980s, when I knew him, Larry taught writing classes at Columbia and mentored students while at work on his second novel. I remember him sitting in on workshops with students, as a participant not a teacher, to get feedback on his work-in-progress. Each time he read his writing to the class, I found myself thinking it was awful. 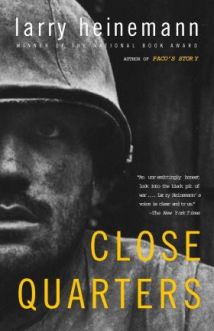 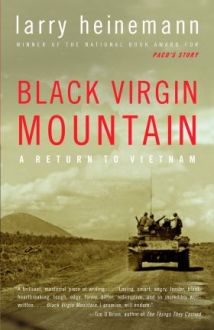 Larry Heinemann died last month, on December 11. His obituary appeared in The New York Times, The Washington Post and Chicago Sun-Times because Larry reached national fame by winning the 1987 National Book Award for fiction for Paco’s Story, that second novel he was working on at Columbia. The astounding win rocked the literary world. Larry was little-known, despite his acclaimed debut. Not only that, but Paco’s Story had been passed over for review by The New York Times, which hurried to review the novel once it became a finalist. Everyone expected Toni Morrison to win for Beloved and certainly, if not Morrison, then Philip Roth for The Counterlife. A week after Larry accepted the award, chief book critic for The New York Times, Michiko Kakutani, published her outrage in an essay. She compared Paco’s Story to Beloved, pointing out why the latter, her favorite, should’ve won.

I didn’t realize that witnessing Larry’s early career would inform my life as a book critic. As a graduate student, I jumped to quick conclusions about his work-in-progress without consideration of what he was trying to achieve. My private thoughts gleefully trashed what he read out loud. It didn’t occur to me to step back and probe what the work was missing and why; or to discern the purpose of themes and characters under development. I knew my negative thoughts were slamming the better writer so I could feel better about my own, amateurish efforts, but I allowed them, wanting them to be right. When Larry won the national award, I read the news filled with guilt. I’d already graduated and left Chicago, but I’d not forgotten my insecurity that became my inability to give him and the book’s early versions the objective consideration they deserved. Although never shared publicly, my thoughts played out to an unseen audience unfairly and ridiculously judgmental, so petty.

The Los Angeles Times chastised the influential Kakutani for “ill-considered condescension toward a writer” and for being “indignant, days after the ceremony, because her personal favorite did not win.” It’s a sobering comeuppance. When I re-read it for this blog post, all these decades later, I wondered: What if Kakutani had reviewed Paco’s Story when it was released, long before it became an award contender. Would she have found it praise-worthy, as did other critics? What would she have seen in the book’s characters and narrative structure without the blinding comparative light of Beloved?

Larry taught at Columbia College Chicago for 14 years, until faculty politics drove him away. A year later, in 1986, he published Paco’s Story. I wrote him a letter after reading his familiar new book, and in his reply, dated May 1987, he reflected on the classes we shared as “some of the last good times I had at Columbia” before he experienced “the agony of extricating myself.” That fall, he won the National Book Award, and I wrote to him again, a congratulatory letter. I didn’t expect to hear back, but a year later I received a letter in which Larry shared the story of the award night, his great surprise, “But I’ll be damned if I didn’t win the thing, much to the consternation of the NY Times.”

By then, I had let go of my graduate school guilt, but that guilt had pushed me toward the important lessons of respect for the hard work of authors and of objectivity for their books, lessons that Larry never knew his writing life and astounding award had shown me. It has become the stuff I share in presentations, when people ask what it looks like to be a book critic, for this is where it began for me, my own “ill-considered condescension,” a warning I heeded. Three months after that 1988 letter, I wrote my first review. Thank you Larry, and as you inscribed in my books and closed the letters, God bless and take good care.

6 thoughts on “Lessons for a book critic”