On a day in July 1988, a German-stamped package turns up in the mailbox of Walter Gersdorff in upstate New York. It contains a diary someone discovered in the rubble of his childhood home that was destroyed to make room for a new apartment building. Through the ingenuity of local librarians, the diary found its way from Hamm, Germany, to Walter, who recognizes the diarist Josef Hofmann. Fifty years ago in 1938, Josef was one of the lodgers Walter’s mother took in for money. Walter thought the fatherly man was a dispatcher in the neighboring railroad yards, but the diary tells a different story: Josef was a Soviet spy, and his entries in this new spy novel by David Downing are compulsively readable. 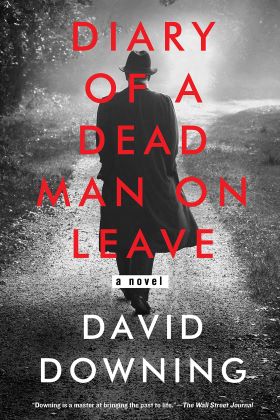 British espionage author David Downing is a master of historical espionage, writing best sellers that have won him a cult following. He is well known for his World War I Jack McColl novels and World War II John Russell “Station” series (the book titles taken from names of Berlin train stations). This new, stand-alone spy adventure follows Josef on a mission to identify former members of what was once, before Hitler, the world’s second largest Communist Party – the KPD in Germany – and then determine whom he can trust to sabotage German railroad operations.

From April to November 1938, Josef writes in the diary to come to terms with his past and present — and to understand Nazi Germany in this time of the Anschluss and the Night of Broken Glass. He reflects on his Communist mission, efforts and life, but the heart of his diary focuses on growing close to the inquisitive 12-year-old Walter Gersdorff and his widowed mother Anna.  After 11 years of isolated work as a secret agent, Josef’s needs and loyalties are shifting, influenced by his emotional attachment to the Gersdorffs, which also include Anna’s aging, confined father and her oldest son Erich. Such a shift goes against all his training and creates inner conflict.

Anna’s embrace was a demonstration of trust, and it was that which unnerved me. In another world I might be worthy of the faith Walter and his mother seem eager to place in me, but in this one I seem fated to let them down.

In the evenings, Walter seeks Josef’s fatherly attention and help with homework, including advice about the propaganda and Fascist lies he’s being taught in school.

I’ve never known a twelve-year-old so willing to question what he was being taught, but I suppose I haven’t known many twelve-year-olds, and much of what passes for sanity in Nazi Germany would strain anyone’s credibility.

Meanwhile, Walter’s brother Erich gets sentenced to six months hard labor for his anti-government activities, and Anna confides in Josef about a pro-Nazi lodger who’s obsessed with her. In the novel’s most successful plot line, the man pressures Anna into dinner dates, and when she refuses his marriage proposal, he denounces her with false accusations, leading to her arrest.

Josef is clever, perceptive and sincere. He lacks the hard edge and distant demeanor of what we might expect in a secret agent, such as those created by Alan Furst and John le Carré. Also, his political work is missing the intensity one would expect from a Soviet operative; and yet, the book is hard to put down. Much of that is due to Josef’s humanness. His writing at night in his room at the boarding house becomes confessional; and his back story of weary global espionage exposes his loneliness.

Three years ago I would have had an emergency number to call, but after that practice cost us a couple of men, Moscow decided it was proving too expensive. If I’m unlucky and have to flee the country at short notice, I shall have to find my own way out.

In the news, Hitler threatens to invade Czechoslovakia and there’s increasing hatred toward the Jews in the press and on the streets creating dark, atmospheric tension. We know the outcome of these events, but Josef writes without that future knowledge, lending the story a fearful innocence.

Most of the time it’s hard to take Nazi Germany seriously – the ideology is so ludicrous and so utterly transparent to anyone who knows anything about the way societies work. And no one who has lived outside his own country for more than a few weeks could swallow the nonsense they talk about national and racial hierarchies. If Walter, a twelve-year-old so-called Aryan, can see through it all, then why can’t everyone else?

We learn the fate of the Gersdorff family 50 years later when the 62-year-old Walter in New York picks up where Josef’s diary abruptly cuts out. He provides updates on the people whom Josef mentions, but he can only speculate about what happened to our diarist. For the grown-up Walter, Josef’s entries bring meaningful closure to his childhood days leading up to World War II. For readers, the diary offers a quiet spy story, more personal viewpoint than sabotage, and also a war story about loyalty, friendship and honor.

Diary of a Dead Man On Leave by David Downing is published by Soho Crime. A version of this review was broadcast on NPR member station WOSU 89.7 in central Ohio.