In the opening scene to this incomparable memoir, author John Connell delivers a newborn calf by himself for the first time. He goes into detail about the difficulty he’s facing, working the ropes around the calf’s feet, twisting the body to bring out the hips and struggling to deliver the head of this large newborn. After laying the calf on fresh bedding, Connell pours water into its ears, writing: “and he shakes his head and comes to moving life, and I smile with relief.” But there are complications with fluid in the lungs, and to save the calf Connell slings it over a gate, massages the lungs and slaps it.

I release him down into my arms and carry him back to the fresh bedding, alive and safe. 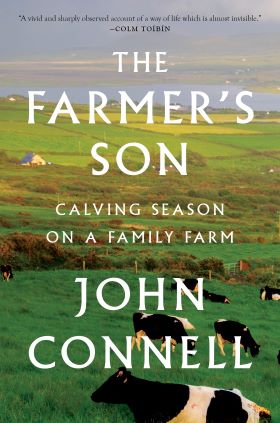 Memoirs of farming life are often about urbanites abandoning city anxiety for perceived agricultural peace. This one is different in that farming is not a way of life to learn but to allow. Connell at the age of 29 has returned to the cow and sheep farm his family has owned for 30 years in County Longford, Ireland. He plans to write a novel and, in exchange for a roof over his head, help his father manage the animals.

This Irish memoir became a best-seller last year in its native country under the original title The Cow Book: A Story of Life on a Family Farm. Released this past May in the United States, the book’s title changed to The Farmer’s Son: Calving Season on a Family Farm. I can’t help but think the original title might have gotten more attention with that proud bovine on the cover. Or maybe that’s just me loving the whimsy of the one versus the predictable pastoral scene of the other. Either way, Connell didn’t intend to write a memoir about his farming life, asking his agent:

Who would be interested in a book about a beef farm in Longford?

Fortunately, he gave in and has written memorably about his relentlessly demanding and unquestionably rewarding daily farm work. As the pages turn, it becomes an immersive seduction of short sections written with present-tense immediacy, like intimate journal entries recording the morning feedings, the cleaning and bedding of pens, and the tending of herds. There’s also times of sickness that come upon the newborns caused by bad weather or contaminated silage. Connell writes:

Farmers will tell you that the loss of a calf does not bother them. That is quite simply a lie.

In a section called “Emergency,” Connell is on a re-energizing run without his phone. When he gets back to the car, he sees several calls from his father. A calf is dying. His father is so enraged at his son’s absence he can hardly speak. It is one of several fights that thread through the book, a wrestling between father and son we are told is common in farming. In another section, called “Truce,” Connell is the one who explodes, exhausted from carrying the relentless night shift in which he must keep an eye on the pregnant cows.

Connell explores the history of our relationship with the cow through the ages and expounds on factory farming and growth hormones. His delving into these topics is informative and flows evenly into the story of his days. Connell also refers to the years before he returned to the family farm, when he worked as a journalist and film producer in Australia and Canada, and when he suffered a debilitating depression. These occasional references — he doesn’t go into detail — are just enough to emphasize the book’s moral vision of the farming life as home.

There was a time when that darkness had a powerful hold on me, but that was long ago, in another calving season. I do not think of that time anymore; it is better not to. We do not talk of it either, save only in passing. I have come to love health and life and work, to think of each day as a gift, tomorrow a bounty, a land of unknown triumph and tragedy, and for all of it I am ready.

Near the end, more deaths among the newborns occur, and there are long days of drenching rain. It’s a tough time. Connell and his father get through it but not without another bitter fight that causes Connell to leave the farm. It seems impossible he would not return, and we hold our breath until he does.

The Farmer’s Son: Calving Season on a Family Farm by John Connell is published by Houghton Mifflin Harcourt. A version of this review was broadcast on NPR member station WOSU 89.7 in central Ohio.