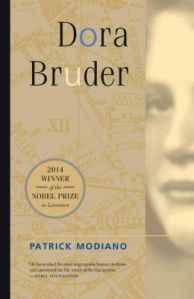 The Nobel Foundation gave French author Patrick Modiano the coveted Nobel Prize in Literature 2014 this past October.  He’s written 17 novels during his career, but few are available in English translation. Yale University Press and University of California Press in November released Suspended Sentences and Dora Bruder, respectively. David R. Godine published Modiano before he won the prize with Missing Person and Honeymoon, as well as the children’s book Catherine Certitude.

I’ve picked up a copy of Dora Bruder, which I’m looking forward to reading. Meanwhile, my curiosity about books originally published in French led me to the recently announced longlist for the 2015 International IMPAC Dublin Literary Award. And when I say longlist, I mean indeed a long list — there are 142 nominees. The titles are nominated for the award by libraries worldwide. The award goes to a single work of fiction that must be published in English. According to the organization’s press release, this year’s candidates were nominated by libraries in 114 cities and 39 countries.

Eight of the nominees are books translated from the French into English. I’ve listed the eight novels here, with beginning sentences from their overview descriptions. The Read More will take you to the full overview on the website of the International IMPAC Dublin Literary Award. All eight appear to be available with online booksellers. Éric Reinhardt’s novel, at this point in time, is only available as an ebook and Andreï Makine’s novel I found on Amazon but not Barnes & Noble.

“On May 16, 2003, fourteen suicide bombers launched a series of attacks throughout Casablanca. It was the deadliest attack in Morocco’s history. The bombers came from the shantytowns of Sidi Moumen, a poor suburb on the edge of a dump whose impoverished residents rarely if ever set foot in the cosmopolitan city at their doorstep. Mahi Binebine’s novel Horses of God follows four childhood friends growing up in Sidi Moumen as they make the life-changing decisions that will lead them to become Islamist martyrs.” Read more.

“Tyrone Meehan, damned as an informer, ekes out his days in Donegal, awaiting his killers. ‘Now that everything is out in the open, they will all speak in my place – the IRA, the British, my family, my close friends, journalists I’ve never even met. Some of them will go so far as to explain how and why I ended up a traitor…’” Read more.

For Sure by France Daigle;
translated from by Robert Majzels
Published in English by House of Anansi.
Published in French as Pour sur.

“For Sure is among other things a labyrinth, a maze, an exploration of the folly of numbers, a repository, a defense and an illustration of the Chiac language. Written in dazzling prose — which is occasionally interrupted by surprising bits of information, biography, and definitions that appear on the page — Daigle perfectly captures the essence of a place and offers us a reflection on minority cultures and their obsession with language.” Read more.

Nothing Holds Back the Night by Delphine de Vigan; translated by George Miller
Published in English by Bloomsbury.
Published in French as Rien ne s’oppose a la nuit.

“Only a teenager when Delphine was born, Lucile raised two daughters largely alone. She was a former child model from a Bohemian family, younger and more glamorous than the other mothers: always in lipstick, wayward and wonderful. But as Delphine grew up, Lucile’s occasional sadness gave way to overwhelming despair and delusion.” Read more.

“Raphaël Jerusalmy’s debut novel takes the form of the journal of Otto J. Steiner, a former music critic of Jewish descent suffering from tuberculosis in a Salzburg sanatorium in 1939. Drained by his illness and isolated in the gloomy sanatorium, Steiner finds solace only in music. He is horrified to learn that the Nazis’ are transforming a Mozart festival into a fascist event.” Read more.

“In Soviet Russia the desire for freedom is also a desire for the freedom to love. Lovers live as outlaws, traitors to the collective spirit, and love is more intense when it feels like an act of resistance. Now entering middle age, an orphan recalls the fleeting moments that have never left him…” Read more.

Update 4.5.15: The author’s last name was incorrectly spelled as Maldine. The correct spelling is Makine.

“Here is a new work of fiction by the always surprising Nothomb that subverts any attempts at categorization; a smart, singular, surreal novel about personality and philosophy, trauma and healing, solitude and human connection from one of Europe’s most talked about and beloved authors. One morning, the heroine of this book, a well-known author named Amélie Nothomb, receives a letter from one of her readers – an American soldier stationed in Iraq by the name of Melvin Mapple.” Read more.

The Victoria System by Éric Reinhardt;
translated by Sam Taylor
Published as an ebook by Penguin Books.
Published in the French language as Le système Victoria.

“David Kolski never sleeps with the same woman twice – apart from his wife. Then he meets Victoria. Head of people at a multinational company, by day she is a ruthless executive in a lightning-paced, high-pressured whirlwind of power and productivity. By night she likes good wine, luxurious hotel rooms, and abandoning herself to her sexual fantasies.” Read more.

2 thoughts on “A few French novels (in translation)”