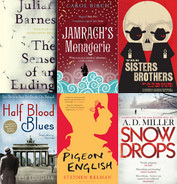 A majority are betting Julian Barnes will win the esteemed prize; however, surprises have already begun, with debut novelists on the short roster (Stephan Kellman and A.D. Miller) and talented author/previous Man Booker winner Alan Hollinghurst ousted. The most interesting surprise, though, is the premise for the judges’ selections for the shortlist. From The Periscope Post of the United Kingdom:

“The judges have caused controversy by claiming that they were prizing readability over any other quality. [Dame Stella] Rimington said, ‘We want people to buy these books and read them, not buy them and admire them,’ on The Guardian, whilst The New Yorker’s Book Bench quoted Chris Mullin: ‘Other people said to me when they heard I was in the judging panel, “I hope you pick something readable this year.” That was such a big factor, it had to zip along.'”

Below are the six finalists the Man Booker judges deem zippy.  Decide for yourself. I might caution you about Pigeon English, which indeed zips along but lacks resonance for U.S. readers. (Here’s why.) I’ve noted U.S. availability and link to the Man Booker synopsis of each novel. The winner will be announced Tuesday, October 18.

The Sense of an Ending by Julian Barnes
Small (less than 200 pages) novel about one man coming to terms with the mutable past. Scheduled for U.S. publication in October.

Jamrach’s Menagerie by Carol Birch
About a young boy on a sea adventure that involves a fabled dragon. Available now.

Half Blood Blues by Esi Edugyan
Set in 1940s Paris after the German occupation and 50 years later, focusing on the disappearance of an African American musician. Not scheduled (at this point) for publication in the U.S.

Pigeon English by Stephen Kelman
Told from the viewpoint of eleven-year-old Harrison Opoku, newly arrived from Ghana and living in the London projects. Available now.

The longlisted books I selected for my “want to read” selections that didn’t make the shortlist are Far to Go by Alison Pick, A Cupboard Full of Coats by Yvvette Edwards and A Stranger’s Child by Alan Hollinghurst.

The Man Booker is Britain’s most prestigious book award given annually for new literary fiction. Its goal is to reward the best novel of the year written by a citizen of the British Commonwealth or the Republic of Ireland.

Update July 23, 2012: links that broke due to the new design of the Man Booker website have been fixed.

One thought on “Man Booker finalists that “zip along””