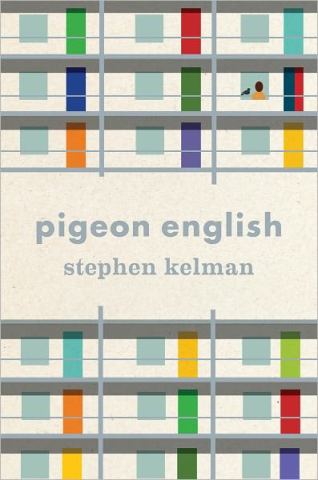 Pigeon English is one of those publishing stories that gives hope to every yet to be discovered new novelist. It was found in a British literary agent’s slush pile, sent by the author Stephen Kelman, who wrote it in six months after being laid off from his job.  The agent signed him as a client and sold his debut in seven countries. This summer, Kelman’s novel about gang warfare in a London housing project was long-listed for the prestigious Man Booker Prize.

It bears mentioning that some of the British hype over this book has to do with the story drawing heavily on the murder of 10-year-old Nigerian Damilola Taylor in a London housing project. The senseless brutality that occurred in 2000 dominated headlines and enraged the public. Security cameras caught video of the young boy joyfully running home, lost in a private game, only later to be found stabbed in a stairwell, where he bled to death.

I wish I had known of this connection to a real crime before I read Pigeon English, published last month in the U.S. I realize one shouldn’t need a story explained before you read it — there’s no clearer sign of its failure — but much of Pigeon English was lost to me because I didn’t understand what the story was driving toward and why I should care about the protagonist. Often, location references and slang language perplexed me.

The novel opens with a boy murdered outside a fast-food restaurant. Harrison (Harri) Opuku, an 11-year-old Ghanaian boy, observes the bloody crime scene. He’s newly arrived to this gang-ruled area with his mother and older sister Lydia, while his father, grandmother and baby sister, Agnes, remain in Ghana. Harri speaks in a grammatically incorrect, slang-infused child-like staccato that over-explains observations he’s not old enough to understand. He’s a typical kid excited about the newness of life. His behavior is endearing and humorous, especially when he and his best friend Dean try to solve the murder case by determining a person’s guilt from signs such as “ants in your pants” and “biting your fingernails.”

Harri fails to detect the deadliness of the evil surrounding him, whether it be his aunt’s boyfriend dealing in counterfeit visas and wielding a baseball bat called Mr. Persuader, or his friend Jordan showing off a knife kept in his trousers. There’s a pigeon that watches over Harri, although Kelman takes that relationship a little too far by occasionally entering into the pigeon’s viewpoint, giving the bird a guardian angel-like persona that’s silly and forced.

Pigeon English may be interesting and uniquely written, but I didn’t find it very involving. There’s that aforementioned problem of why Harri should matter to us. Also, the murder mystery sits too far in the background to spark narrative tension, and the occasional clues about it offer no more intrigue than Harri’s chatter about super heroes or his Diadora trainers. If you’re willing to read up on the Damilola Taylor case, though, there’s a greater chance you’ll connect to Harri’s story, which comes to a devastating end.