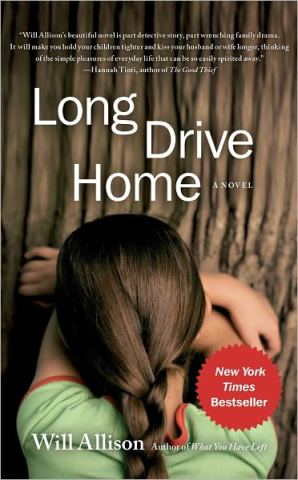 Will Allison’s new novel, his second, relentlessly pierces us with uneasiness as he focuses on a lie about vehicular homicide. The page count is a slight 182, but the story is so gripping you’ll feel like you’ve spent far longer with the narrator, Glen Bauer, than the few hours it will take to reach the last page. Told from Glen’s perspective, the drama is written as a confession to his daughter, a kind of letter she can read when she’s older. Such an approach creates an intimacy with readers that brilliantly heightens the tension.

The car accident happens on a typical afternoon, after Glen, a work-at-home accountant, picks up his six-year-old daughter, Sara, at school. On their way home, Glen releases road rage by giving the finger to a police officer, only to have a mean-spirited driver in a menacing black Suburban think he’s giving it to him. There’s a verbal confrontation and threats before Glen apologizes and the two drive off. If that weren’t enough to shake up a quiet drive home, a little further down the road, a convertible Jaguar driven by a teenaged boy cuts in front of Glen so close he has to practically stand on his brake pedal to stop the car in time.

Sara observes it all from the back seat, and that includes the next incident, when the Jaguar appears again, this time speeding toward them on the shady neighborhood lane where they live. This is how Glen describes it:

“And then, instead of laying on the horn or just letting him pass, I lashed out. It was instinct, more a reaction than a decision. I cut the wheel to the left – as if I were going to turn in front of him into our driveway – then back to the right, to get out of the way. I was trying to give him a scare, slow him down, teach him a lesson. I figured at worst he’d slam on the brakes. Instead, he swerved into our lane, like he meant to squeeze past us on the other side.”

The Jaguar hits the curb and rolls, killing the young driver. And here begins a kind of narrative so taught with psychological tension it makes your skin crawl. I squirmed uncomfortably under Glen’s sheepish lies to the police, his wife, the investigating detective, the victim’s mother and her lawyer, let alone to his daughter, whom he hopes didn’t comprehend the truth of what took place.

Pretty soon Glen’s wife, Liz, realizes he’s gotten them into trouble and worries they’ll be sued. She forces Glen into a legal separation to protect their assets, tearing apart their once idyllic suburban New Jersey existence. Meanwhile, the investigating detective hounds Glen with questions, as everyone waits for the boy’s autopsy to see if he was drunk. But for us, it doesn’t matter what the autopsy says, or even if the boy’s mother doesn’t sue, because we know what Glen thought and what he did. We live with him in his fear and anxiety, his snowball of lies and his hope that normal life with Liz and Sara will return.

Long Drive Home feels too close for comfort because it’s a story about an impulsive reaction that, in a blink, destroys a blessing we all take for granted — that of being able to wake up in the morning to an ordinary day. Glen is a good family man reacting emotionally over something that, on any other day, he wouldn’t have given a second thought to. What happens to him could happen to anyone, and Will Allison has captured what it feels like in Glen’s heart and soul with pitch perfect resonance.