This memorable story about gambling, the American West and queer love takes place in the late 1950s. Atomic bombs are tested in the empty desert beyond Las Vegas, and advancements in color television, suburban housing sprawl and freeway development all hum with progress in the background. You’ll not soon forget the author’s gorgeous prose; it evokes a tremendously powerful melancholy that sings not alone with the sadness and isolation of lost souls, but also with the hope of release. 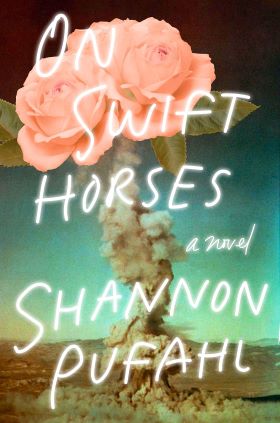 To start, we meet Muriel, a waitress at the Heday Lounge. She eavesdrops on gambling horsemen calculating their bets to place at San Diego’s racetrack. Every weekday they come to the bar, retired trainers, bookmakers and ex-jockeys.

They talk as men do, confident and gently adversarial about the coming race day, the horses off their feed, the jockeys with tapeworm, the cup and feel of the track. They set long odds and argue over them.

Muriel takes what she hears to the racetrack where she consistently wins, raking in thousands of dollars. She hides her financial triumph from her husband Lee, who dreams of owning a suburban house. Lee and his brother Julius had planned to build that house together, after their service in the Korean War, but Julius now prefers Las Vegas, where he can disappear into the shadows, gambling and picking up men.

With subtle exactness, a low-level frustration hovers over Julius’s cagey absence, as it disrupts the happiness of the young married couple. Lee’s simmering suspicion vacillates between bitterness and worry, and Muriel’s yearning for acknowledgement becomes resentful. She wrote to Julius about her gambling, but Julius ignored her confession.

Muriel, “orphaned and alone” after her mother died, married Lee and moved to California without loving him. She appears to be the archetypal June Cleaver, but we know she’s not by her incognito betting activities at the racetrack and also by her refusal to sell her mother’s house in Kansas, which would pay to build Lee’s dream house. Both secrets indicate intention for something else, a pull toward an unconventional truth. Like Julius, Muriel uses deception as a means of self-preservation.

Eventually she gives Lee her racetrack winnings for the new house, but she intensifies her marital lies by claiming she sold her mother’s house in Kansas to get the money. Muriel sees the house where she grew up as her oasis.

She tries to imagine what her mother might think of this deception and she can’t. She’ll still have the house and her own money but she is giving up something more crucial and her mother would have seen that.

Meanwhile, Julius meets Henry, the love of his life.

The stylistic and arresting prose plays as much of a role in this exceptional story as the drama. The sumptuous color and depth of description strengthen our understanding of Julius’s daily angst, Muriel’s quiet power and Lee’s willing blindness. At times, however, the lyricism overwhelms and denies the dramatic tension, veering us out of a critical moment, tamping the energy. This happens especially when characters slide into lyric remembrance at an emotional height, often testing credibility that a person would do that in their anxiety.

It’s hard to watch Julius crumble. After Henry betrays him and leaves Las Vegas, his life descends into theft and wandering. Julius shows up unannounced at Lee and Muriel’s house with a horse, a gift that’s a loud, odd gesture to hide his anguish and shame. There’s no fence, and nowhere to put the horse. Julius again disappears, and this time Muriel explores gay establishments in San Diego to find him, or at least traces of him, discovering during the effort her own repressed sexuality and love that’s not for Lee.

Julius, Muriel and Henry come together in spirit with a poker chip and a note pinned to a bulletin board for missing loved ones in an underground meeting place for men. At this point, Julius realizes he’s been found and forgiven for his many transgressions while Muriel flies free in this story about the allure of love and chance, and the satisfaction and despair that can come from it.

On Swift Horses by Shannon Pufahl is published by Riverhead Books. A version of this review was heard on NPR member station WOSU 89.7 FM, broadcasting throughout central Ohio.