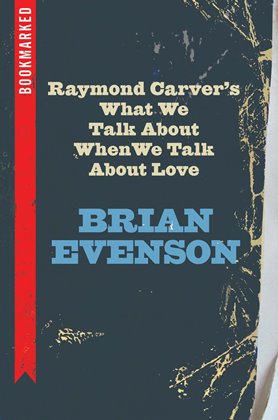 A long time ago, during my days as a magazine editor, my senior editor worked on an article that needed to be “shaped up” before we could publish it. He was a very talented writer, a graduate of Northwestern University’s prestigious school of journalism, and I could trust him to make the appropriate changes. What happened, though, is he made too many changes and hijacked the original writer’s voice with his own.  I remember standing behind him, reading the copy on his computer screen and realizing he’d gone too far. It was great copy, and it would’ve been a perfect article, but I couldn’t move forward with it. I told him he had to start over, to put aside his writer’s voice and his overly aggressive editorial pen.

Raymond Carver’s What We Talk About When We Talk About Love: Bookmarked by Brian Evenson is part of the Bookmarked series* where writers delve into an important book of literature that influenced their writing career. For Evenson (pronounced Evanson), that’s Raymond Carver’s famous short story collection, the one that followed the ground-breaking collection Will You Please Be Quiet, Please?  With a powerful punch, both moved the art of minimalism into popular and now classic literature. Evenson read Carver for the first time when he was 18 years old.

This slim book is part autobiography and part literary discussion that together become a fascinating story, so well told I couldn’t stop reading it. It’s written with one of those narrative voices that makes you feel like you’re listening to your best friend. Evenson shares his journey of what he learned from Carver’s book, and woven into this journey are stories from his personal life, involving his Mormon education at Brigham Young University; a difficult break-up with a girlfriend; a serious health crisis that almost took his life; and the details of a writing career that expose the underbelly of pursing the art. 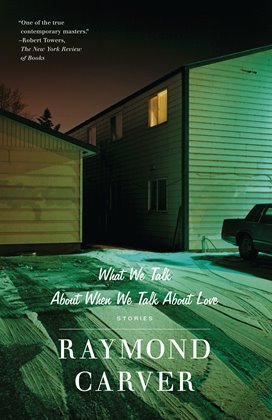 Also, Evenson shares how he came to know the famous literary editor Gordon Lish, who worked with Raymond Carver. It’s common knowledge now that Lish strong-armed Carver’s writing with aggressive editorial changes, but Evenson brings his own experience to this knowledge – he published stories in The Quarterly, Lish’s literary magazine, and worked with Lish on his first book. Evenson writes, “He tended to provoke but if you took a different path than he suggested and achieved strong results he would be full of nothing but praise. If you tried and failed, however, he might berate you. Above all, he always suggested, what was important was the work and the success of the work.”

Evenson goes on to write, “Still, Lish’s personality was large enough and his aesthetic sufficiently developed that it was a balancing act as a young writer not to allow yourself to be absorbed by it, particularly when he was suggesting dramatic cuts.”

There’s a story here that Evenson is telling about writing and editing, and at this point it’s examining exactly how much Lish edited Carver –- how much he had a hand in creating Evenson’s favorite book What We Talk About When We Talk About Love – and whether or not it makes a difference. Evenson travels to The Lilly Library in Indiana where Lish’s archived correspondence, manuscripts and papers are held. Here, he sees first-hand Lish’s extensive editorial marks on Carver’s manuscripts – entire pages crossed out, except a line or two, and a story ending written in Lish’s handwriting. “It makes you feel, well, weird, and if you’re a writer it makes you think, too, about every edit you’ve accepted or rejected, makes you wonder how those edits change you, not only as a writer but as a person. Do they damage you? Do they diminish you?”

If I had allowed the senior editor I worked with to revise the article with his own voice, the writer likely would’ve raised hell with me over the phone. I could’ve handled it – we bought the article and so it belonged to us – but I would not have believed I was in the right to allow it. Her byline came with the article. Also, I wanted her voice, her insight and creativity.

Evenson doesn’t go down a path of saying whether or not Lish was right or wrong. Instead, he explores what took place, such as pointing out that while Lish may have been brutal with his editorial pen, Carver accepted the changes. He also writes, “At the same time, I’ll continue to insist that yes, whether you see Carver or Lish as more responsible for these stories, they are excellent stories. American literature would be less without them.”

*About the Bookmarked series, from the publisher’s description…

The Bookmarked series focuses on a famous work of literature that left a powerful impression on an author (hence the name Bookmarked – a book that left its mark). Each entry in the series is a no-holds barred personal narrative detailing how a particular novel influenced an author on their journey to becoming a writer, as well as the myriad directions in which that journey has taken them.

Books in the series include John Knowles’ A Separate Peace, Kurt Vonnegut’s Slaughterhouse-Five, Larry McMurtry’s The Last Picture Show and others. For a complete list, visit their website.

4 thoughts on “A book that left its mark”