Where have all the photos gone? Those full bleed black-and-white portraits on the backs of novels showcasing the authors; those images that make you wonder about their gift for writing and maybe the lives they have led.

I received a copy of Cherry by Nico Walker in the mail this week. It’s one of the hot novels of the summer getting a big response, not just for the story but the author who’s in jail. One of the first things I did when the book arrived was look for the author’s photo, inside the dust jacket. That’s where it usually appears now, with few exceptions, and it’s typically a head shot. The back of the book is needed for promotional praise.

But look at when it wasn’t that way, when an author’s photo weighed in on the importance of his or her work and consumed the back of the book. Below are some of those I’ve captured from my library.

Here’s Truman Capote from his second book, A Tree of Night and Other Stories, published in 1949. He’s looking seductively confident that he’s on his way to becoming a household name. This is before he published In Cold Blood (1966), for which he’s most famously known. 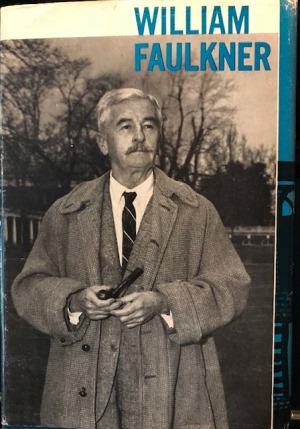 Here’s another literary titan from the mid-20th century, the genius William Faulkner on the back of his novel The Mansion, published in 1959, the third book in his famous Snopes trilogy following The Hamlet and The Town. He, too, looks confident in his abilities, pipe in hand, having won the Nobel Prize in Literature in 1949.

But what about all the hard work of writing? Instead of showcasing their confidence, some publishers put their authors at their desks for the photo, like Katherine Anne Porter in pearls. This is from her one and only novel Ship of Fools (1962). It took her forever to write it. Doesn’t she look relieved?

Grace Metalious, author of  the best-selling Peyton Place, shows herself hard at work on the back of the paperback edition of the 1959 sequel Return to Peyton Place. She’s comfortably concentrating on the typewriter but also looking a bit worried, as if she doesn’t know where to begin.

John Fowles turns aside from his typewriter on the back of his 1963 debut The Collector. That firm gaze with folded hands and carefully combed hair solemnly channels the creepiness of the novel’s socially repressed kidnapper, Frederick Clegg, as if he’s saying, “You must read this chilling story that will become a classic.” 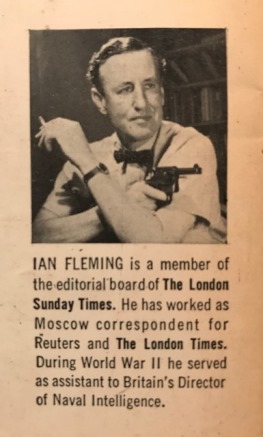 But let’s lighten things up here with Ian Fleming, who on the back of his James Bond paperbacks holds a cigarette and a gun. 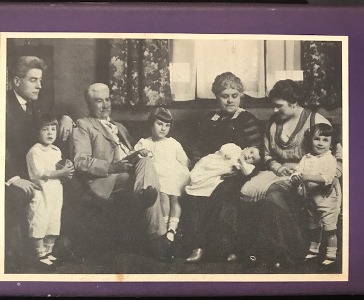 And Mary McCarthy in Memories of a Catholic Girlhood (1957) who shares the family on the back of her autobiography, a Who’s Who of relatives we can ponder as we turn the pages of her story. Mary is the little girl in the middle.

And finally, one of my favorites, here’s Carson McCullers on the back of Clock Without Hands, published in 1961. She looks luxuriously exhausted, too tired to even hold up her cigarette. Such a burden she carried from being an overnight success with her first book, The Heart Is a Lonely Hunter (1940). Doesn’t it make you wonder what she has written in these pages, and make you want to read the book?

One thought on “The lost art of authors’ photos”