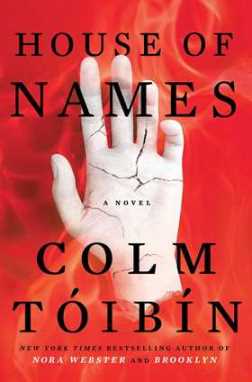 The story of King Agamemnon and his wife Clytemnestra is a well-known tragedy in Greek mythology penned by the classical Greek playwrights Aeschylus, Sophocles and Euripides. Contemporary Irish author Colm Tóibín (The Testament of Mary, Brooklyn, Nora Webster) re-imagines it with mesmerizing effect in his new novel. It’s a grim plot, where murder requires justice and justice results in more murder, spinning a never-ending circle of deadly revenge. Thankfully, Tóibín deftly invests in each protagonist’s emotions and needs in a way that mitigates the horrific bloodshed. Indeed, Tóibín has a powerful talent for intensely inhabiting the minds of his characters, and House of Names is no exception.

Agamemnon’s soldiers are land-bound by the wind-less weather that prevents them from sailing their ships into battle. Their leader lures his wife and beautiful daughter Iphigenia to the army’s camp, telling them Iphigenia is to marry the soldier Achilles. Instead, Agamemnon uses Iphigenia to appease the gods and kills her as a sacrifice. The wind arrives, and his army sets sail. Clytemnestra returns to the palace, devastated and filled with vengeance.

With conniving, murderous manipulation, she takes control of the palace guards and governing elders. She releases the prisoner Aegisthus from the palace dungeon and embraces him as her lover and evil co-conspirator. When the victorious Agamemnon returns from war, that night, Clytemnestra stabs him in the neck. Meanwhile, Aegisthus locks her daughter Electra in the palace dungeon and abducts her son Orestes, imprisoning him in the countryside. In response to Clytemnestra’s demand that her son be brought home, Aegisthus replies with power-grabbing steadiness, “I will decide when it is the right time for him to return. I will be the one who decides that.”

After Clytemnestra’s vivid, fateful narrative, we enter the world of Orestes, who escapes his captors. With two fellow escapees, he finds safety on a farm owned by an old woman. There he lives in peace and exile, unknowing of the fate of his family. And then we hear from Electra, aware of what happened to her father and of the evil that lurks in the palace corridors. She daily visits her father’s grave and waits for the return of Orestes, so they can avenge Agamemnon’s murder. Of all the protagonists, Orestes brings gentleness to the story with his innocence. It’s a stark contrast when he returns to the palace, bringing with him a sense of peace from the farm and the deep love he experienced there. And yet, Orestes is the heir to the throne, and justice for his father’s murder requires more killing.

Even if you know this story from Greek history lessons, or the opera Elektra by Richard Strauss, you will not know it like this. The lyric storytelling brings a human understanding to this bloody story, given from within the agony of those involved. For me, the book was hard to put down. And in the end, there’s a kind of hope that begins to rise, with hints of new leadership entering the palace that’s more reasonable and less vengeful.

4 thoughts on “This unhappy Greek family”