In the first pages, Radtke day-trips with her boyfriend Andrew to Gary, Indiana, where they discover moldy photographs in the ruins of a cathedral. Radtke later learns the photos were snapped by a 24-year-old photographer whose friends scattered his ashes with images amidst the ruins as a memorial. This event is one of three during Radtke’s early college years that altogether change her life. The second is the unexpected death of her beloved Uncle Dan, who dies from a rare genetic heart defect that threads through her family. The third is merely driving past a deserted mining town after her uncle’s funeral.

What these experiences share is overwhelming loss and impermanence — and Radtke can’t shake their effect on her. She becomes restless, melancholy and emotionally removed, developing a fascination for deserted places of ruin. Radtke’s drawings precisely evoke her struggle to hold her life together, such as when her relationship with Andrew falls apart and her apartment literally rots from mold. She escapes to Italy to be alone. There she notices ruins aren’t abandoned and ignored, rather restored, honored and visited by tourists. 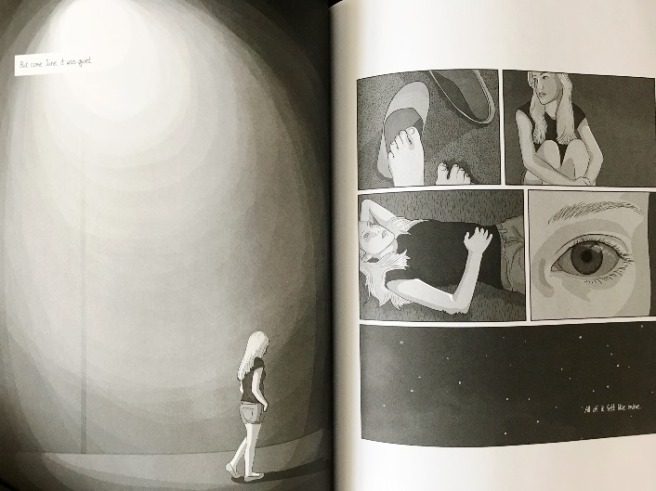 From here on, Radtke feels the need to travel to make her life count. She worries she could have the family’s genetic condition and devotes pages to its medical details. But Radtke doesn’t travel for pleasure – it’s to feed this unshakable fascination that consumes her. She visits World War II ruins in the Philippines, a town in Iceland once buried in volcanic ash and Peshtigo, Wisconsin, where the nation’s deadliest wildfire took place in 1871. The drawings of her reflective face, her slump, her faraway gaze out a window portray her need to grasp what these abandoned places mean. She yearns to give them meaning, but comes to realize it’s not hers to give.

Imagine Wanting Only This moves through college, graduate school, a first job in Kentucky and then residence in New York City, with a future apocalyptic vision of New York under water. Radtke doesn’t force a gratuitous conclusion with that vision. Nor does she force a connection between ruined places and heart failure. Instead, she successfully – and beautifully — lets her detailed illustrations and dramatic narrative do that necessary work.

This review was recorded for broadcast on WOSU 89.7, with slight edits to adjust for recording time.