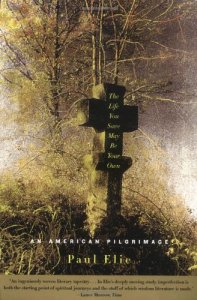 Over the years, I’ve given books to friends who come to my house for dinner on Christmas Eve. It’s a joy for me and them, this book carefully selected and then placed on the table to function as their place card. Below are the selections I made this year and the reasons behind my decisions.

The Life You Save May Be Your Own: An American Pilgrimage by Paul Elie
I’ll start with a misfire. It’s not the book you see here. This actually was my first choice, but I second guessed myself and instead gave Paul Kalanithi’s bestselling memoir When Breath Becomes Air. With Kalanithi’s book being front and center in the media and on bestseller lists, I knew I was risking that my friend would already have read the book, and indeed she had. That was the misfire, i.e., not listening to my gut instinct. With my first choice on hand, I was able to get it to her the next day — Paul Elie’s The Life You Save May Be Your Own, focused on the literary life and religious faith of mid-20th century writers Flannery O’Connor, Walker Percy, Thomas Merton and Dorothy Day. I thought my friend, an entrepreneur and ordained minister, who enjoys deep, thoughtful topics, would find many pause-worthy moments in Elie’s acclaimed work that The New York Times described as “a freeze frame from another era of the perennial search for truth.” 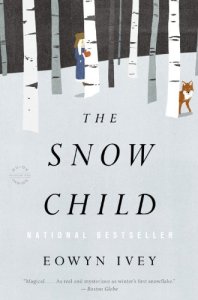 The Snow Child by Eowyn Ivey
I always look for an absorbing novel for this friend. She’s one of those readers who will stay up all night to find out what happens next. She tells me she must plan her reading so as to miss not just sleep, but also appointments or anything else that would get in the way of The End. And so this novel, a finalist for the Pulitzer Prize and penned by the lyric Alaskan native author, came to mind for its intrigue of an unusual child’s presence in the lives of a struggling couple. Jack and Mable are trying to make a life together in 1920’s frontier Alaska when the snow child comes into their lives, but is the child fantasy or reality? Ivey released a new novel this past summer, To the Bright Edge of the World, but I selected her first novel because my friend is a specialist in early child education. I thought the combined mystery and child focus would deeply absorb her.

Upstream: Selected Essays
by Mary Oliver
Oliver is a popular poet whose beautiful words, philosophies and insights transport readers into the natural world and its wisdom. Among forests, rivers, ponds and fields, she presents a kind of peace and acceptance that transcends the hysteria of modern life. An example is her poem “Am I Not Among the Early Risers” in which she writes: “What will ambition do for me that the fox, appearing suddenly / at the top of the field, / her eyes sharp and confident as she stared into mine / has not already done?/” Oliver’s new collection of essays seemed like a no-brainer for this friend who loves poetry and the outdoors. These essays have been gathered together as a sort of autobiography, with Oliver reflecting on the natural world, as well as topics from childhood and her adult writing life. As much as I knew my friend would enjoy the book, though, I afterwards wondered if I should’ve reached for something more unexpected. Oliver’s essays are a best-seller, like Kalanithi’s memoir, and while my friend hadn’t read it, upon opening it, she recognized it. Is there more magic in receiving a book that’s completely unknown?

Between the World and Me
by Ta-Nehisi Coates
Speaking of bestsellers, here’s another one. I tend to avoid the bestseller list because it is the go-to source for many when they want a book selection – and the list is so limiting, given the phenomenal choices beyond it. Alas, Ta-Nehisi Coates’ phenomenal book also came to mind. I selected it for a friend who read Hillbilly Elegy and loved it. I don’t believe she’s an avid, even frequent reader, and so I thought giving her this important, highly lauded book about ideas of race would capture her attention. Between the World and Me is a letter to Coates’ adolescent son about what it’s like to be black in America today. It’s universally described as “required reading.” Between the World and Me won the 2015 National Book Award in Nonfiction and came in as a finalist for the Pulitzer Prize and the National Book Critics Circle Award.

Rosemary: The Hidden Kennedy Daughter by Kate Clifford Larson
Here is another friend whose reading habits I believe are spotty, at best, and by that I mean it’s possible she doesn’t think to read, except maybe when someone hands her a book. Given the Kennedy family story continues to fascinate this nation of readers, I thought this new biography of a lesser-known Kennedy daughter — sibling of the famous Jack, Robert and Ted, her brothers of political fame — would capture my friend’s interest. Rosemary Kennedy was intellectually disabled and kept as a family secret. It’s a tragic story that is the reason her Kennedy relatives established and supported government opportunities and resources for the disabled. In an interview with NPR’s Scott Simon, author Kate Clifford Larson said of Rosemary: “She was virtually hidden for decades, but the siblings apparently — or so it has been said — that they were not aware of what happened to Rosemary, or where she was, for nearly 20 years. I don’t think that’s entirely accurate … but they had learned not to ask, and so they didn’t ask.”

dimir Nabokov
Finally, a classic autobiography chosen for a friend who has become an avid reader, one who keeps a list of books to be read, frequents the library and reads every day. She posed a challenge in that I know she reads this blog, and so I didn’t feel I could select from anything I’d written about here. Likely, if it was a good match, she would already have it on her list. I’ve given her literary novels she has loved and not loved so much (yet she has read every page); and then, I remembered she loved Friday Night Lights, a book I recommended a while back. I took that non-fiction cue and immediately this beloved memoir by Nabokov came to mind for its nostalgia, beautiful writing and Nabokov’s insight into his Russian childhood. It struck as a perfect combination of literary style and a true story that my friend would enjoy. From the Humanities article Why Nabokov’s Speak Memory Still Speaks to Us: “After closing the pages of Speak, Memory, John Updike, no slouch himself as a prose stylist, was carried away.” I hope the same for my friend.

2 thoughts on “The books I gave this holiday season”