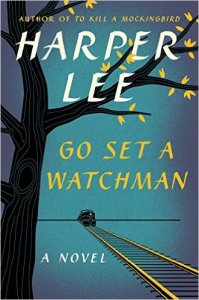 Harper Lee’s second novel became available to readers today. Go Set a Watchman is the book Ms. Lee wrote prior to her classic, Pulitzer Prize-winning novel To Kill a Mockingbird. Some could say it was the first draft. In the late 1950’s, Ms. Lee’s editor at J. B. Lippincott & Co. saw within that first manuscript a stronger story in the flashbacks of the protagonist Jean Louise Finch (a.k.a. Scout). She sent Ms. Lee back to her typewriter to write that other book, and To Kill a Mockingbird was born. Go Set a Watchman was never published until now.

From the announcement about the discovery in The New York Times, February 4, 2015:

“Ms. Lee said she had thought the draft of ‘Go Set a Watchman’ had been lost or destroyed. Then last fall, Tonja Carter, her friend and lawyer, discovered the manuscript in a secure place where Ms. Lee keeps her archives, attached to an original typed manuscript of ‘To Kill a Mockingbird.’ According to Ms. Lee’s publisher, Ms. Carter didn’t understand what she had stumbled on at first, until she realized that the passages weren’t from Ms. Lee’s first and only novel.”

A July 3rd article in The New York Times casts doubt on whether or not this is the first discovery of the manuscript. From that article, with the title “Harper Lee’s ‘Go Set a Watchman’ May Have Been Found Earlier Than Thought,” there’s this:

“But another narrative has emerged that suggests the discovery may have happened years earlier, in October 2011, when Justin Caldwell, a rare books expert from Sotheby’s auction house, flew to Alabama to meet with Ms. Carter and Samuel Pinkus, then Ms. Lee’s literary agent, to appraise a ‘Mockingbird’ manuscript for insurance and other purposes.

“The discrepancy between the two accounts raises questions about whether the book was lost and accidentally recovered, and about why Ms. Lee would not have sought to publish it earlier.”

Today’s New York Times reports Ms. Carter’s revised version of her discovery story in “A New Account of ‘Watchman’s’ Origins and Hints of a Third Book:”

“The new statements from Ms. Carter, who has been a central figure in bringing the novel to publication, feature some discrepancies with her earlier accounts of the book’s discovery, which could revive skepticism about ‘Watchman’s’ provenance even as bookstores and readers across the country are celebrating its release.”

I read To Kill a Mockingbird a long time ago. I didn’t think re-reading it would be best in my approach to Go Set a Watchman, especially considering this new novel came first; however, I wanted to get my thoughts into the arena of Harper Lee’s life and work. And so, below, to share, are the online places I visited to reacquaint myself with the story of Scout and Atticus Finch. Like many, I will be reading the new novel over the next few days. 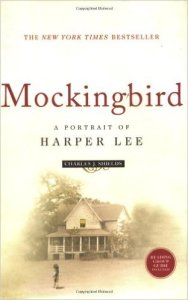 “Good Scout”
Garrison Keillor’s review of Mockingbird: A Portrait of Harper Lee by Charles R. Shields gives a peek at Ms. Lee’s struggle to create her famous novel. As you would expect from Keillor, it’s an enjoyable review that includes the following:

“If you were going to draw a movie from this book, you’d start on York Avenue in Manhattan on a cold winter night in the late 1950’s. Pages of manuscript fluttering out of an apartment window and then a young woman, weeping, picking them up out of the snow. She is an airline ticket clerk and she has been working at her typewriter late at night ever since she came to the city over her parents’ objections in 1949. She is on her own. Her childhood pal, Truman, an effeminate boy befriended by the boyish girl, is nearby but out of range, flying high, a heralded young novelist (‘Other Voices, Other Rooms’) with a Broadway musical in the works. In his wake, she strikes people as dumpy and distant. She perseveres. In November 1956, she walks into an agent’s office at 18 East 41st Street with five short stories in hand, and is encouraged. On Christmas Day, at her friends Michael and Joy Brown’s town house on East 50th, they present her with a gift, a note — ‘You have one year off from your job to write whatever you please. Merry Christmas.’ She is bowled over by their generosity. A year later, she has the beginnings of a novel, ‘Go Set a Watchman,’ which becomes ‘Atticus,’ which, under the tutelage of a patient editor at Lippincott named Tay Hohoff (‘dressed in a business suit with her steel gray hair pulled tightly behind her, . . . short and rail-thin with an aristocratic profile and a voice raspy from cigarettes’), after the cold winter night breakdown, she finishes in the summer of 1959.”

“Engrossing first novel of rare excellence”
This sentence is from a 1960 review of To Kill a Mockingbird, which appeared July 17 in the Chicago Tribune. The review also includes this:

“The first-person narrator is a pistol of a little girl about to enter first grade just after the narrative starts; her nickname is Scout. She has a brother, Jem, four years her senior. Her father is a widowed lawyer named Atticus. Then there is a little boy her own age — Dill — who comes each summer to visit in Maycomb, Ala., during the mid 1930s.”

“To Kill a Mockingbird focuses on that gut instinct of right and wrong, and distinguishes it from just following the law. Even the titular quote: ‘Shoot all the blue jays you want, if you can hit ’em, but remember it’s a sin to kill a mockingbird’ is in itself an allegory for this message.”

“While Robinson’s trial gives the film its momentum, there are plenty of anecdotal occurrences before and after the court date … especially Scout’s reactions to, and relationship with, Boo Radley (Robert Duvall in his movie debut), the reclusive ‘village idiot’ who turns out to be her salvation when she is attacked by a venomous bigot.”

7 thoughts on “Remember, it’s a sin to kill a mockingbird”