I have a habit whereby I borrow books from the library, and yet I know I won’t be reading them because I don’t have time, what with the reading schedule already packed. But I want to pretend I can and will read them, and so I take them out of the library and look at them on a table in my house. Not stacks of them. Just a couple. It’s like renting an expensive diamond necklace that’s far beyond one’s financial means for ownership and wearing it for a night at an exclusive event. I once read somewhere that’s what celebrities do when they attend the Oscars. They wear the jewelry and take it back. For me, I keep the books and then take them back. The habit occasionally leads me to a purchase, thinking I’ll read the book during that fabled time we all hope for called “some day.” And so to share, here are three recently published books, two fiction and one non-fiction, currently in my house on loan from the library.

The Water Knife by Paolo Bacigalupi
A timely thriller you may have heard about, considering it’s made an appearance on The New York Times best-seller list in their Sunday Book Review. The narrative situation is an extreme drought in the American Southwest with states engaging in violence and corruption over the dwindling supply. Rumors of a game-changing water source come to light in Phoenix, prompting Las Vegas “water knife” Angel Velasquez, described on the dust jacket as detective, assassin and spy working for the Southern Nevada Water Authority, to investigate the rumors. Why I borrowed the book: The thriller aspect, the timely concept and curiosity about the protagonist, as well as the near future setting, feel intriguing. Seems like a good summer selection for the beach, the pool or the porch. 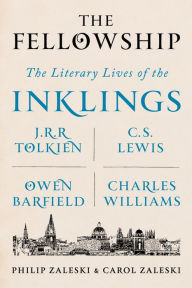 The Fellowship: The Literary Lives of the Inklings (J.R.R. Tolkien, C.S. Lewis, Owen Barfield, Charles Williams) by Philip Zaleski & Carol Zaleski
The Inklings met weekly in nearby pubs and the academic rooms of C. S. Lewis in Oxford, England. They were a group of friends and colleagues who (quoting from the publisher/dust jacket) discussed literature, religion, and ideas; read aloud from works in progress; took philosophical rambles through woods and fields; gave one another companionship and criticism; and, in the process, rewrote the cultural history of their times. The Zaleskis explain the reason for focusing on the four, out of the several Inklings, because they are the best known of the group and also the most original, as writers and thinkers. Why I borrowed the book: For 10 years with a beloved group of friends, I read the books of C. S. Lewis. Like the Inklings, we called ourselves The Clivers, for Clive Staples Lewis. I’ve read 45 pages into this 500+ page tome and have discovered it promises to be a wonderful book. I’ll probably buy it.

The Book of Aron by Jim Shepard
This is a Holocaust story narrated by a young boy in the Warsaw ghetto, thieving with other children for survival. He’s rescued by a doctor known throughout prewar Europe as an advocate of children’s rights, and in the story he’s in charge of the Warsaw orphanage. From the dust jacket: “Treblinka awaits them all, but does Aron manage to escape — as his mentor suspected he could — to spread word about the atrocities?” Why I borrowed the book: No doubt a dark topic and difficult reading; however, commentary about the book indicates the story richly evolves into more than the darkness and that author Jim Shepard lightens it with the very human way he brings the characters to life. Also, there’s bravery. Also, I would like to get to know the work of Jim Shepard.