On June 17, the winner of the International IMPAC Dublin Literary Award will be announced. This is one of my favorite annual awards to watch, as it progresses through a phenomenally long long-list of nominated novels (142 this year) into a short-list of 10 that yields the winner. The IMPAC always provides a great reading list of novels, from which I’ve discovered brilliant authors from different countries, but it is more a personal favorite because of its premise: Nominations are made by librarians from around the world, those wonderful people who watch, know, present, recommend and curate books for the public to read. They see hundreds of books move through their lending institutions and can showcase those that may not be getting the attention they deserve.

Past International IMPAC Dublin Literary Award winners have been Man Gone Down by Michael Thomas (2009), The Twin by Gerbrand Bakker (2010) and Let the Great World Spin by Colum McCann (2011) – novels I’ve read and can recommend.

One requirement: In order to be considered for the IMPAC award, the novel must have be written in English or translated into English.

The 2015 shortlist below includes several titles that have been mentioned here on TLC. You’ll also find Richard Flanagan’s popular 2014 Man Booker Prize-winner among the candidates. 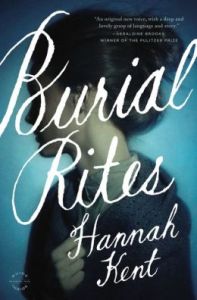 I recommended Burial Rites to several book groups. It’s a compelling story inspired by the real life fate of Agnes Magnúsdóttir, a young woman who was the last person to be executed (publicly beheaded) in Iceland in the early nineteenth century. She was condemned for murder. Prior to the execution, she was held in protective custody by the farm family of a government official. In the story, Agnes’ presence on the farm creates strife and challenge for the parents and their daughters, who wrestle with the convict’s sympathetic humanity. Among the librarian comments: “This meticulously researched novel provides a vivid voice for Agnes and those who shared her last days. Kent uses her powerfully drawn characters and compelling narrative to bring the time and events to life.” 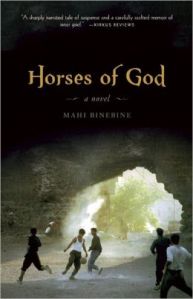 This novel appeared on TLC in a list of books by French authors that I’d culled from the 2015 IMPAC longlist. It’s one of those novels that not only tells an engaging story but leaves the reader stunned by the awareness of how poverty and the promises of Islam can together create a young suicide bomber. It’s a phenomenal novel, brief (under 200 pages) and told in spare prose. BineBine focuses on four childhood friends growing up in the impoverished shantytowns of Sidi Moumen, a suburb of Casablanca. The story has roots in fact: On May 16, 2003, fourteen suicide bombers launched a series of attacks throughout Casablanca. It was the deadliest attack in Morocco’s history. The comment from the Chicago library includes: “This novel by Moroccan author Binebine concerns young boys who become suicide bombers, and it upends much of what is often assumed about such lives.”

Someone by Alice McDermott (American)
Nominated by the Veria Central Public Library, Greece

I’m a big fan of Alice McDermott since a long time ago when I read her second novel, That Night. It’s one of my all-time favorite books. McDermott has written several more novels — I also loved Charming Billy, which won the National Book Award (1998). McDermott is an uncontested master when it comes to portraying everyday life among Irish Americans, as she does with Marie Commeford in Someone. Booklist, Publisher’s Weekly and Kirkus Reviews gave starred reviews to the novel, and it’s been praised to the heights by many readers.  The librarian comment includes: “A novel that shows how indefinite and ordinary but also beautiful a life can be when you have someone to share it with.”

Flanagan’s fictional take on the WWII Japanese POW experience and the “death railways” built in Burma is rooted in his father’s connection to the historical event. The protagonist is surgeon Dorrigo Evans, who struggles to treat and save suffering POWs working with him on the railroad. He is haunted by a love affair he had with his uncle’s wife two years earlier. Rave reviews abound; however, Kirkus Reviews came after Flanagan for flowery descriptions about the love affair, saying they border on the likes of a “swoon-worthy bodice ripper.” Among the librarians’ comments: “Flanagan’s novel explores love and death, the horror of war, and the nature of heroism.”

K will be available in the United States on July 31. It’s the story of a father searching for his daughter who “disappeared” during the military dictatorship in Brazil. Forecasts for the novel prior to its American publication aren’t out there, from my search results, but from what the nominating librarian says, K promises to be an unforgettable page-turner. It’s based on a real story from the author’s life — Kucinski’s younger sister disappeared in 1973. From the book’s publisher, Latin America Bureau: “As the author says, ‘Everything in this book is invented but almost everything happened’.” From the librarians’ comments: “…a remarkable book written in sparse language hovering between memoir and novel, a compelling tale almost impossible to put down.” 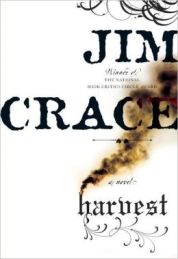 I’m not a big fan of Jim Crace due to personal taste, not professional critique. There’s something about his storytelling that, as a common reader, doesn’t appeal to me. I often think I should give his work another chance because he’s frequently among award nominees and his work is highly regarded. Harvest, for example, was also nominated for the 2014 Man Booker award. The story takes place in an isolated English farming village where the stable of the manor house burns down. Fingers are pointed at newcomers to the village. Witchcraft and revenge come into thematic play. Among the librarians’ comments:  “…tightly plotted; less than a week passes from the moment smoke is sighted until the book’s fateful outcome, and yet once underway, we have the sense that everything is inevitable.” 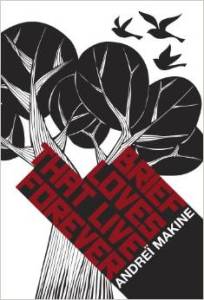 I’ve made the comment here on TLC that Andreï Makine is an author whose work, given the time, I’d chain-read. After I finished his novel Music of Life, I only wanted to keep reading whatever he wrote. Brief Loves That Live Forever will be available to U.S. readers in August. The Guardian begins their review of the book with this: “Siberian-born Andreï Makine’s latest novel lives in the memory long after the last page is turned. In a series of interlocking episodes the narrator – like Makine, an orphan – guides us through the totalitarian world of Brezhnev’s Soviet Union. Makine’s prose is both spare and meditative, and leads us deep into the memories of a world that is now gone.” Among the librarian’s comments: “…sober and powerful style of history and love stories from the Soviet time to the fall of the Berlin Wall. Prose of big sensibility, quiet in suggestion.”

Within this novel are the stories of Frederick Douglass on an international lecture tour in Ireland in 1845; the first nonstop transatlantic flight in 1919 by two WWI aviators headed for Ireland; and Senator George Mitchell’s 1998 peace talks in Northern Ireland. McCann weaves together the disparate stories into what many praised as a compelling narrative, much as he did with Let the Great World Spin, which won the 2011 IMPAC Award. Among the librarians’ comments: “TransAtlantic is a delight to read. Through writing that is both lyrically lush and detailed, the reader meets fascinating characters, historically grounded in the 19th and 20th centuries, who are deftly linked through their connections to Ireland and America.”

With all the hub-bub over Phil Klay’s award-winning story collection about Iraq soldiers, Redeployment, I missed this novel about a soldier returning home from the same war after four years of duty. From the publisher’s description of Sparta: “His life becomes increasingly difficult to negotiate: he can’t imagine his future, can’t recover his past, and can’t bring himself to occupy his present. As weeks turn into months, Conrad feels himself trapped in a life that’s constrictive and incomprehensible, and he fears that his growing rage will have irreparable consequences.” Lots of praise from the media, except Kirkus Reviews described it as “well-intentioned but flawed.” The librarian’s comment: “A searing portrayal of the experience of a classics scholar and Iraq war veteran who returns home from the war to find he no longer belongs in either world.” 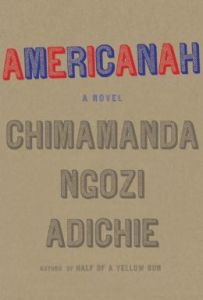 Winner of the 2014 National Book Critics Circle Award for Fiction, Americanah tells the story of teenagers Ifemelu and Obinze who fall in love in Nigeria when it’s under military dictatorship. Everyone is leaving, including Ifemelu to study in the United States. Obinze is unable to join her and finds his way, illegally, to London. Years later they reconnect. Kirkus Reviews wrote, “Soap-operatic in spots, but a fine adult love story with locations both exotic and familiar.” Among the librarians’ comments: “A love story, an immigration story, and a portrait of race in America. Authentic and captivating.”