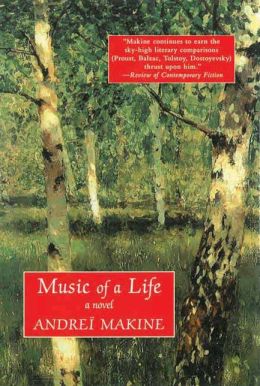 I discovered the French-Russian author Andreï Makine among the French novels long-listed for the 2015 Dublin IMPAC Award. His nominated/newest book is Brief Loves That Live Forever, a collection of eight stories; however, after researching Makine’s bibliography, I decided to read an earlier work, Music of a Life. The novel’s story of Alexeï Berg, a promising classical pianist in Moscow during Stalin’s Reign of Terror, became a powerful, brief seduction during an afternoon I spent on a beach in south Florida. It is told as a look-back from two decades later, when the narrator happens upon Berg playing a piano in a train station. Berg shares with him his extraordinary story.

In a mere 109 pages, Makine’s lyric writing creates an ominous atmosphere of Soviet life and an astonishing story of a lost dream and human resilience. Alexeï Berg is forced to mature and survive amid great loss of family and career, yet he carries within his soul, secretly and unexpressed, an ongoing love for music. The dramatic change in his young life happens two days before his first concert performance after he leaves the final rehearsal. On his way home, he is passed by a man — not making eye contact, not stopping — who says, “Don’t go home.” Berg enters the building across the street from the apartment where he lives with his parents and, through the windows, sees a uniformed officer inside. He flees, stealing the family car and disappears into the escalation of World War II, assuming a dead Russian soldier’s identity.

The Independent in Britain wrote of Andreï Makine: “He is not interested in money and is among the rare breed of authors who refuse to take advance payments for their books. He is writing because he believes ‘that a book, in the words of his boy narrator, can remake the world with its beauty.'” 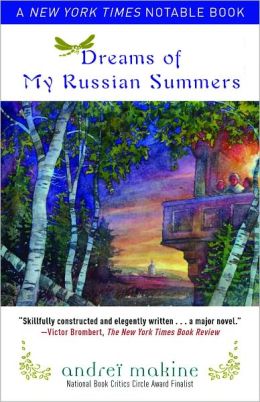 The above quote is from an interview that references the boy narrator in Le Testament Français, Makine’s fourth novel, published in the United States as Dreams of My Russian Summers. The story, considered to be autobiographical fiction, about a boy’s teen-aged years in the 1960’s and 1970’s, also seduces with deeply felt writing that’s richly evocative of Soviet life; however, the boy’s metaphysical pondering won’t capture every reader. He spends summers with his French-born grandmother, Charlotte Lemonnier, in a town at the edge of the Siberian steppe. He escapes dreamily into her stories about Paris in the early 20th century — stories about Proust, Tsar Nicholas and Alexandra’s visit, the 1910 flood and the death of French President Félix Faure. The events are preserved in articles and memorabilia stuffed into a suitcase. The contents, elaborated on by Charlotte, sweep the boy into an imagined world he can’t shake. He experiences a kind of beauty one feels and senses with incomprehensible, overwhelming depths that cannot be communicated. “The unsayable was essential,” he tells us, and it envelopes and isolates him.

The boy narrator is for the most part nameless throughout the novel, other than a one-time mention of his nickname, Frantsuz (the Russian word for a Frenchman), and at the end of the novel, Alyosha, an affectionate diminutive of the name Alexey. The boy eventually grows up and away from Charlotte, less enchanted by her repeated stories “from an Atlantis, engulfed by time” and more interested in his adolescent yearnings for women and adventures with classmates in Moscow. The stories of Paris, however, have changed him. So, too, has Charlotte, who in her own young life left Paris to be with her mother in Russia and suffered famine, brutal winters, Stalin’s purges and the chaos of war.  She has introduced into her grandson’s life the duality of the Western world in all its allure and the Soviet world of cruel injustices, scarcities and violence. His wrestling with that dual love — one for that “essential beauty” and the other for his homeland — is a profound journey of wonder, hope and the eternal connection of things past and present.

Dreams of My Russian Summers received France’s top literary prizes, the Prix Médicis and the Prix Goncourt. It was the first time this double win had ever happened, but it didn’t come easily. Makine, born, raised and educated in the Soviet Union, found his way to Paris in 1987 where he lived the tough life of an impoverished writer who couldn’t get his work published. He wrote his books in French, but French publishers couldn’t believe such elegant writing in their language could come from the pen of a Russian. Eventually, a few books were published, but it wasn’t until 1995 that Andreï Makine became recognized with his award-winning Dreams of My Russian Summers.

Both Music of a Life and Dreams of My Russian Summers are translated from the French into English by Geoffrey Strachan.

Andreï Makine told The Independent: “…you have to understand that there are 26 different tenses in French, and the French can eat, walk and make love in these different dimensions of time. Whereas in Russian we only have the basic three — past, present and future, and this changes the way that we look at life.”