I always keep an eye on old books — or perhaps I should describe them as “books published not so recently” — and squeeze them in between reading the onslaught of new books grabbing my attention. Perhaps there’s a metaphor for life in this, a reminder not to overlook the old and used that just might offer a great treasure or teach something new.

And so, here are three fictional stories from 1993, 2009 and 1930 to start a new year. In each of them, I found myself involved and entertained. 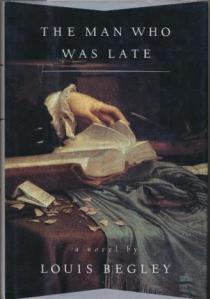 The Man Who Was Late by Louis Begley
I discovered Louis Begley’s alluring second novel The Man Who Was Late in a rare and used bookshop. It’s what you would call a “mannered” novel in that the rhythm and tone of the prose carry a hint of formality, as the narrator Jack reflects on the life of his Harvard classmate, Ben. They are the closest of friends, with disparate backgrounds: Jack is East Coast upper class and Ben the Jersey son of Jewish refugees. The language creates what’s compelling about the story, a bit of remove that reflects Ben’s reserved character. He is a charming, high-profile international investment banker and lover of many women. But he holds the world at bay to protect his loneliness. Ben’s affair with Jack’s cousin Véronique in Paris forces him to confront painful realities about who he is and what he’s done with his life, burdened by believing he missed the proverbial boat in securing a place in the good life. The Man Who Was Late, published in 1993, ultimately is a love story, but you come away holding in afterthoughts a moving, unforgettable character portrait. Of note: Louis Begley won high praise for his first novel Wartime Lies. It was listed among the best books of 1991 and nominated for the National Book Award that year. 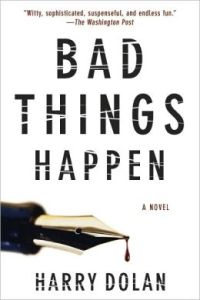 Bad Things Happen by Harry Dolan
The Wall Street Journal listed Harry Dolan’s The Last Dead Girl as one of 2014’s best mysteries, but when the book came out earlier in the year, I found more enthusiastic reviews for his 2009 mystery Bad Things Happen. It’s Dolan’s first novel, and it introduces his character David Loogan in his David Loogan Series. The Last Dead Girl is #3 and the prequel to Bad Things Happen. The final clincher for me to read the old rather than the new Dolan book was its “you won’t figure it out” description of twists and turns. That is indeed true, making Bad Things Happen intriguing high-entertainment. The easy-going, suspicious, criminally inclined Loogan is hired as an editor of mystery magazine Gray Streets in Ann Arbor, Michigan. Gray Streets publisher Tom Kristoll lures him into hiding the body of a dead man (no questions asked) and then ends up dead himself. Two more murders follow, and the detective on the case is torn between thinking Loogan is a suspect versus an ally in finding the truth. The story is all-at-once suspenseful, fast-paced and written with a light touch of humor. Very fun to read.

Pietr the Latvian by Georges Simenon
For many readers, this may be a so-what recommendation. Georges Simenon’s prolific outpouring of Inspector Maigret crime novels during the mid-20th century is legendary. Also, many likely are familiar with the Inspector Maigret PBS television series starring Michael Gambon. But the full monty of Maigret novels has been unavailable for some time, and hard to access. A few years ago, I wrote here on TLC about my unsuccessful attempt to get my hands on the first Maigret novel. Now it’s here, thanks to Penguin Books that’s publishing new English versions of all Simenon’s Maigret books, 75 in total. The first, Pietr the Latvian (newly translated by David Bellos), was originally published in serial format in 1930. It features the 45-year-old Inspector Maigret hunting a notorious international swindler. The narrative style is far from great prose, but that’s not what I’m looking for when I turn to Simenon. I want a reading snack, and he always delivers: suspenseful, plot-driven, quick-to-read (usually south of 200 pages) and very satisfying crime stories. I speed right over such laughable writing as:

“It could’ve sounded merely grotesque. But it did not! It was fearsome! Tragic! Terrifying!”

From The New York Times: “Penguin said it was working with the Brazilian company Companhia das Letras and the Belgian photographer Harry Gruyaert ‘to develop haunting, evocative covers that will offer a window to Maigret’s dangerous world and allow readers new and old to identify the series.'”