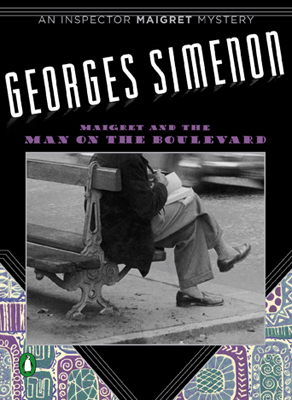 Several weeks ago, a local bookseller suggested I read Georges Simenon’s Inspector Maigret crime novels. We were discussing fictional crime inspectors one could follow in an ongoing series, and Simenon’s Maigret came up as one inspector who does not require such following. He doesn’t have complicated relationships and personal problems that evolve through the books. Hence, a good prospect for one-offs.

During my recent trip to New York, I blithely went to the bookshelves at Three Lives & Company, thinking I’d likely find a Maigret book, which I did. Two, in fact: The Friend of Madame Maigret and Inspector Cadaver. I figured I’d also find a comprehensive list of the series’ titles in the front of the books. Why not start with the first book anyway? No such luck on that list.

Little did I know what I was getting into: Simenon wrote 75 Maigret novels and 28 short stories. Even as I type that number, I’m aware of variations, such as the New York Times Simenon obituary stating this Belgian author wrote 84 Maigret “adventures”. Also, I picked up Patrick Marnham’s biography The Man Who Wasn’t Maigret: A Portrait of Georges Simenon, and it says 76 Maigret novels were written between 1931 and 1972. That’s only a “selected works” list, making one wonder what’s not included.

None of this would seem to make much difference to a new Simenon reader like me, pulling one of his mysteries off a shelf to purchase and read. And yet, it does matter. Development isn’t just about the inspector but also the writer. What if the earlier books are better than the later books? Or the later ones better than the earlier ones? How did Simenon’s crafting of Inspector Maigret change as he became a more seasoned writer?

The voluminous output of Georges Simenon (1903-1989) came from his ability to write a book in 11 days (via The Guardian). He became one of the 20th century’s most significant crime/mystery writers in European literature, writing in the vicinity of 400 books, including 136 non-Maigret novels, plus 200 novellas under pseudonyms, according to his NYT obit. No wonder it’s hard to find the best starting point in his literary oeuvre.

The bookseller at Partners & Crime in New York’s Greenwich  Village told me one of his favorites is Maigret and the Man on the Boulevard (1953), so that became my starting point. Hallelujahs once again for the knowledge and helpfulness of independent booksellers. I’m closing in on the last page of that recommended mystery as I write. Maigret’s intellectual means of sniffing out clues as he searches for a murderer in Paris neighborhoods has got me hooked.