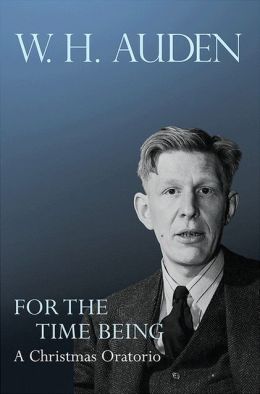 Twentieth Century British poet W. H. Auden intended his long poem For the Time Being: A Christmas Oratorio to be set to music by his friend, British composer Benjamin Britten.  The end product, however, proved to be too long and complex for a musical score, yet a profound poem remained that movingly captured the birth of Christ in its historical and spiritual contexts.

I know poetry is not what many would rush to read, and many probably don’t need one more version of the Christmas story during this season of Advent; however, For the Time Being is especially meaningful because Auden broadens his interpretation to embrace modern-day sins and logic. Indeed, there are references to bars, newspapers, clocks, mirrors and other modern places and objects. And when King Herod enters the picture, struggling with the news of a child being born who is “in some inexplicable manner both God and Man,” he parses the facts like any politically minded leader and self-involved human being in a long speech that ends:

“I’ve tried to be good. I brush my teeth every night. I haven’t had sex for a month. I object. I’m a liberal. I want everyone to be happy. I wish I had never been born.”

For the Time Being begins with dark times on earth and proceeds in sections titled The Annunciation, The Temptation of St. Joseph, The Summons (of the wise men), The Vision of the Shepherds, At the Manger and others, through The Flight Into Egypt – all of the expected, except Auden gives us the inner thoughts, conflicts and feelings of the familiar characters, as well as commentary of an opinionated narrator and watchful chorus. So, for example, we’re not just given the wise men following the star, rather their motivations:

The first wise man sees life filled with liars, and so follows the star to discover how to be truthful now;

The second wise man sees life as always anticipated or remembered, and so follows the star to discover how to be living now;

And the third wise man sees life as overly intellectualized, and so follows the star to discover how to be loving now.

There are some passages in the poem I didn’t understand on the first read, such as the section in which the Biblical, devout Simeon speaks, but there is so much wisdom the poem gave me otherwise, it didn’t matter.

There’s the part where the chorus of angels says to the lowly shepherds:

“Sing Glory to God
And good-will to men,
All, all, all of them.
Run to Bethlehem.”

And the shepherds say:

For the Time Being: A Christmas Oratorio is Auden’s only explicitly religious long poem. The introduction in this new edition published by Princeton University Press, edited by Alan Jacobs, explains the poem’s themes and provides the context of Auden’s life at the time of its creation — a story in itself that provided a powerful platform for a poet who wanted to write about Mary and Joseph, the wise men, angels, shepherds and the Romans when Christ was born.

2 thoughts on “Run to Bethlehem”