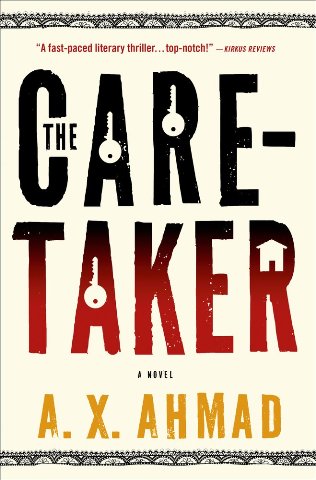 Here’s a literary thriller to shake up the dog days of summer. This is A. X. Ahmad’s debut, well constructed in pacing and surprises for a first. If he writes more thrillers like this one, Ahmad demonstrates he has the talent to become a notable in the genre.

The Caretaker is about deception, political intrigue, class discrimination and cultural misunderstanding. It takes place on Martha’s Vineyard, in Boston and on the disputed Siachen Glacier, which is a no man’s land in the Himalaya Mountains between India and Pakistan. Both countries claim the territory and while not at war over it, there are military skirmishes in the snow-blinding environment.

A U.S. senator provides the charismatic mystery. Senator Clayton Neals, the longest-serving African-American senator, is currently in the limelight for brokering a successful deal with the North Koreans for the release of a Korean-American journalist. He’s basking in the national praise but clearly nervous about something. Behind that lies the reason the novel’s protagonist, Ranjit Singh, unwittingly gets snared into a mess of wrong-doing.

Ranjit is a Sikh immigrant and a landscaper on the Vineyard, barely making ends meet for his family. He’s the humble caretaker of the novel’s title, given the responsibility to watch over summer homes of the rich and powerful during winter months, including the Senator’s posh residence. Living in a neglected rental house in which the furnace quits, Ranjit temporarily moves his wife and daughter into the Senator’s house until he can figure out a solution. One night, two mysterious men break in. These aren’t ordinary thieves. They’re carrying guns with silencers.

The plot immediately gets deliciously intricate and complicated, with Ranjit becoming hunted prey by these mysterious men; his wife and daughter being locked up by Homeland Security; and microfilm with nuclear weapon information falling into Ranjit’s possession. Ranjit’s on the run, living in Boston’s Chinatown, trying to get to the Senator in City Hall Plaza and seeking help at Harvard from the Senator’s wife, Anna, with whom he’s been romantically involved. You think you know who can be trusted and who can’t, as events unfold, but it’s never clear until the end.

Adding to the narrative draw is Ranjit’s back story. He’s the former captain of an elite army squadron in India, and he’s haunted by a mission that went wrong on the Siachen Glacier. It’s a compelling second plot line, vividly created, and expertly connected to Ranjit’s nightmare on Martha’s Vineyard.

There’s an episode near the end of The Caretaker that undermines the quick pace for several pages. Also, the tense final roll-out of dramatic scenes feels slightly more than what’s needed. These are minor quibbles, though, for a thriller that seduces. Much credit goes to Ranjit, who engages us with his vulnerability, dignity and ethical motivations right up to the end.