When you pick up a novel written by Sam Savage, it’s pretty much guaranteed you’ll enter the world of an unusual, smart, blunt, amusing, first-person narrator struggling with failed art. This is Savage’s distinctive signature. As example, Firmin: Adventures of a Metropolitan Lowlife is narrated by a well-read rat living above a dying Boston bookstore. After that came Andy Whittaker, narrating the terrific Cry of the Sloth. He’s a tart, cynical editor of a failing literary magazine who ridicules the puffery of self-aggrandizing writers and snobbish arts organizations. 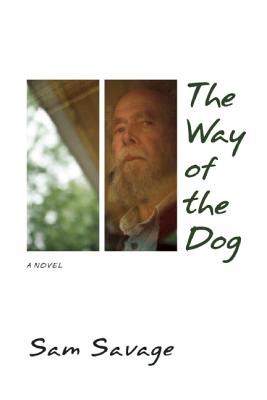 These narrators aren’t hopeless whiners. They expound, rationalize and ruminate with clever commentary, diverting humor and knowing wit while coming to terms with their lives. With their bold, entertaining presence, they hook us into the story. There’s typically not much action, but their outlandish tendencies and refreshing attitudes remove the need because these narrators seduce us with their very personalities.

Now, in The Way of the Dog, we have Harold Nivenson, a decrepit old man in a decaying Victorian house in a gentrified neighborhood living on the first floor of what he calls his lair. He’s surrounded by paintings hung on every inch of the walls that were collected during his life as a failed artist. His days are spent observing beyond his front window the happy, active, middle-aged neighbors he likens to Walt Disney dwarves. (My favorite is the tall, bicycle-riding couple he calls “the spandexed giraffes.”) They’re also spent tolerating the in-and-out presence of his ex-wife and tax attorney son who clean up the place, impose routine and plot to bring a real estate agent and art appraiser into the house.

Savage writes Harold’s story in an addictive, rhythmic monologue. It’s poetic in its short paragraphs that creatively cascade into a story that explains why Harold failed to make anything of himself. We hear about the “sibling torture regime” in childhood, when his brother and sister hid one piece of his beloved puzzles, so they could never be completed; his squandered inheritance and his obsession with Peter Meininger, a painter, friend and rival.

Harold supported Meininger and allowed him and his groupies to live in his house. The relationship of Harold as provider and patron supplanted Harold’s own purpose in life, so when Meininger moved out, Harold lost his sense of place in the world and came close to losing his sanity. Thanks to Roy, however, he steered clear of the “howling emptiness” of his soul.

Roy was Harold’s dog, and his needs saved Harold by providing structure and meaning to a day. In hindsight, Harold realizes Roy and his canine nature can guide him to live peacefully now, and that realization changes him. It’s the kind of wisdom you read and want to remember.

“Every day is all there is. The past does not exist. The future does not exist. What holds past and future together is memory and what holds memory together are stories, and dogs don’t tell themselves stories.”

Sam Savage’s bibliography includes The Criminal Life of Effie O. and Glass, not mentioned in this post.