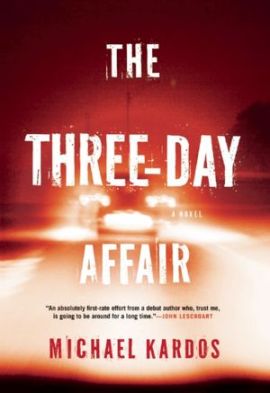 Here’s a thriller that will unnerve you. It’s populated by regular guys who met at Princeton and, since graduation, for the following nine years, get together for annual weekends of golf at posh resorts. Only this year they gather at the modest suburban Jersey home of the narrator Will Walker, a musician who’s trying to save money to open his own studio. He’s not as financially flush as his friends — Nolan Albright, running for a U.S. Senate seat in Missouri; Evan Wolff, aiming for partner status in a NYC law firm; and Jeffrey Hocks, a California dotcom millionaire — but Will’s just as bright and ambitious. Indeed, these are hardworking guys with careers, wives, girlfriends and kids-on-the-way who this one weekend just want to kick back, drink, tee-up and talk about college days. Their ordinariness casts tension over the story because they look like us, or people we know, and the combination of circumstances illustrates how easily honest, conventional life can be railroaded into crime.

Will announces the crime in the novel’s first line: “It almost didn’t happen — the kidnapping and everything after.” He also alludes to the slight of chance that would’ve avoided the kidnapping, had Will not convinced Jeffrey to join the group when he called to cancel. Because the nightmare starts when Jeffrey bizarrely steals not only cash from the register of a convenience store but also grabs the cashier and shoves her into the back seat of the car where Will and Nolan wait, mildly inebriated from dinner and a practice round of golf, thinking Jeffrey’s buying antacids. Jeffrey shouts “Drive!” to Will, who speeds out of the parking lot, believing the girl’s sick or injured and needs to get to a hospital.

Quickly it becomes clear Jeffrey has forced the girl into the car against her will, and they’ve got a situation at hand that could put them in jail. Jeffrey claims he robbed the store because he’s broke, no more a millionaire, and when he took the cash, he panicked, thinking the girl would call the police. Everything snowballs out of control, fueled by misjudgments and ignored voices of reason. Jeffrey, Nolan and Will hold the girl hostage in the sound-proof recording studio where Will works. There’s bargaining with the girl, fist-fights among the friends and close calls of discovery from outsiders. Evan, detained by his work in New York, escapes being involved in the crime, but his friends turn to him for legal counsel. In the face of Evan’s incredulity and judgment, Will thinks Evan can’t possibly understand how the kidnapping happened, and so fast. He thinks, you weren’t there.

The Three-Day Affair is as much about an accidental crime as it is about how people ignore the instinct to do what’s right. It’s also about a bad side of friendship — the untrustworthy side that devastates. The plot is precisely executed right up to the startling ending with come-out-of-nowhere surprises. There’s even one moment near the mid-point of the book when I felt the author Michael Kardos winks at his readers with a tip-off to where his story is going. If you catch it, you’ll be impressed by Kardos’ original storytelling, as I was, and find yourself turning pages even more intrigued by the big “ifs” hanging over the lives of Will, Nolan and Jeffrey — if these friends from Princeton will get back to their normal lives, and if that’s even possible.

The Three-Day Affair is Michael Kardos’ debut novel. His collection of short stories is One Last Good Time.