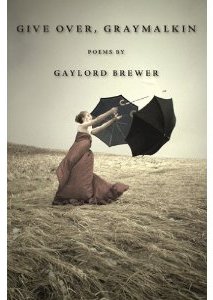 I received a copy of Gaylord Brewer’s new poetry collection in March via a friend who’s a poet and university professor. He recommended the title and also procured a signed copy for me (love that!). I read several of the poems at that time and experienced subjects, philosophy and use of words that seduced my senses.  By ‘use of words’ I mean how they’re conjoined and phrased, in a way I want to read out loud or repeat to enjoy a textured rhythm or cleverness.

But it wasn’t until these summer days arrived that I read Give Over, Graymalkin from beginning to end, during early dawn hours, and in so doing, “reclined in a therapy of summer morning.” That phrase is a beginning line in a poem about the dead metaphor of clouds. It appears in a section devoted to the banality of such overused metaphors, including the post-divorce Harley and the “old guy on that hog.” As Brewer confirms in this interview, the 15 poems with their “ribald humor and literary cynicism” are a thematic detour from the other, more reflective poems in the book.

The majority of the poems were written in India, Spain and France, and it’s the section from the time in India that’s my favorite. In one of those poems, Brewer makes a phone call to his mother in Kentucky in which he tries to express his experiences through “the echoes, stalls, hollows” of the long distance connection that “make joking difficult./ I hear my voice, stiff and loud.” In another he speaks of the spiritual guidance of a Swami who instructs him to laugh first thing in the morning — a laughing meditation — and so “I part curtains, lock doors and windows,/and start laughing my ass off.” It’s a brilliant poem carefully balanced between the humor of what seems ridiculous and the hope of a seeker.

Brewer’s writing invites pensive engagement without getting too heavy.  Indeed, his reasoning, meditative voice in this terrific collection gets under your skin. Consider in “Jungle Appetites” how he reaches the point of recognizing “All the easy,/mournful luck of my life, announcing to the wild.”

One thought on “A therapy of summer morning”