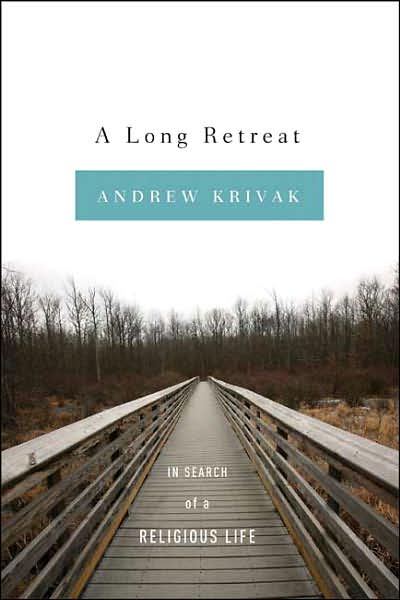 “60 Minutes” recently televised a story about the monks of Mt. Athos, Greece, also known as the Holy Mountain, the center of Eastern Christian Orthodox monasticism. Friends who saw the news segment commented,“I want to go there,” and I heard in those words a desire for the kind of peace known to those who pursue the monastic life.

For myself, that desire is the reason I read books about the monastic life, or memoirs about spiritual journeys, such as Kathleen Norris’s The Cloister Walk and Acedia; Nancy Maguire’s An Infinity of Little Hours: Five Young Men and Their Trial of Faith in the Western World’s Most Austere Monastic Order; and Ari L. Goldman’s The Search for God at Harvard.

So here, a few weeks back, I’m writing about Andrew Krivak’s debut novel The Sojourn and learn Krivak once pursued a calling to be a Jesuit priest and wrote a memoir about the journey called A Long Retreat: In Search of a Religious Life. I headed to the library and borrowed it.  The book sat on a chair unopened for so long I had to renew it, too busy with other books to give it time. Until this week, when I read it late into several nights, immersed in Krivak’s story and my own reflective response, similar to that experienced in the other books I mentioned – a removal from and rising above the small (Did I walk the dogs? Pay the bills? Return that phone call?) and into the larger questions of life, as Krivak struggles to know himself.

A small difference with this memoir, compared to the other books:  The author’s moodiness hangs over A Long Retreat, a kind of brooding and frustration over those larger questions, especially over the lack of compact answers to erase his doubt about whether or not to become a Jesuit. But then, Jesuit formation is not an easy path to walk. It involves years of scholarly study, teaching and ministry, which Krivak thoughtfully and vividly illustrates, so we see not only the joy of the formative process, but also its emotional rigors of loneliness and anxiety.

During his eight years of study and work, Krivak lived among the very poor in the Dominican Republic; studied in Russia and Slovakia; served as a chaplain in a hospital ward of HIV/AIDS patients; and instructed university philosophy students, struggling himself with the questions of life purpose he taught in the class. He writes:

We know from the book’s first page that Krivak does not take final vows, by reference to his wife Amelia, but the ending is still a surprise, as he unravels and deciphers the complex reasons that drove him toward the profession. And yet: “How simple it should have all been. The Spirit calls, the man says yes, and the life that’s lived is a fine one, austere, yet somehow heroic. It has its up and downs, the poignant tests … but anyone in any life could say as much.”

I’ll be giving book recommendations on Friday, October 29, at 11 a.m. You can stream the live show online, sign up for the podcast, or listen from the archives at the NPR member station WOSU 89.7 FM. All Sides Weekend Books airs the third Friday every month with some exceptions, such as during pledge drives.