Pulpfest 2011 is taking place the last weekend in July. The event  primarily features pulp magazines and related materials, but among those related materials will be vintage paperbacks. That got my attention, and I marked my calendar. While I don’t actively collect vintage paperbacks, as I expressed two years ago on TLC, I can’t resist them if they cross my book-life pathways.

As I type, I even hesitate to use the qualifier “vintage” for my predilection. Maybe what I can’t resist isn’t always vintage collectible, just old and intriguing, such as the 1968 Dell first edition paperback of John Fowles’ classic The Magus to the left, with Candice Bergen seductively wrapping her leg around Michael Caine. It was published after the movie, which starred the aforementioned couple and also Anthony Quinn. Nostalgic thoughts about those young actors captured me more than anything else.

Same can be said about this 1960 first edition Signet paperback of Ian Fleming’s Goldfinger, below. My grandmother, not fully understanding the storyline, took my sister and me to see the movie when we were too young for violence. She rushed us out of the theater the first time Oddjob threw his killer hat.

Another movie-related paperback in my library is this issue of Faulkner’s The Reivers, published after the film hit theaters, starring Steve McQueen. The paperback even  came in its own slipcase.  Inside the pages, I found  a Cracker Jack surprise — a newspaper article from the Chicago Daily Tribune dated December 13, 1950: “Faulkner Just a Farmer Who Likes to Write: Nobel Prize Winner Is No Literary Man.” Faulkner won the 1949 Nobel prize for literature but received it in 1950. He gave his acceptance speech December 10, 1950. The Associated Press article reports on his life in Mississippi and thoughts about his books. 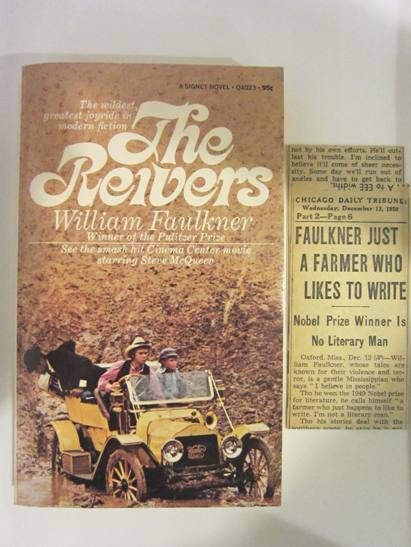 Here’s another old paperback I couldn’t resist buying. This 1950 Bantam edition of Carson McCullers’ Reflections in a Golden Eye would fit nicely into the line-up of many dramatic cover illustrations I’ve seen featured on vintage paperback websites, along with its subtitle: “Strange loves in an emotional underworld.” The guy on the cover looks like a gorilla ready to pounce on that vulnerable, sexy woman in her luxurious slumber.

One more: this 1965 Fawcett Crest edition of John Updike’s Of The Farm.  No racy cover illustration, but the irresistible element is on the back, a line drawing of Updike. Love the design of it and hey, the book has doubled in price over the years from its original 75 cents — I paid $1.50 for it. Another 50 years, it may go for an astounding $3. 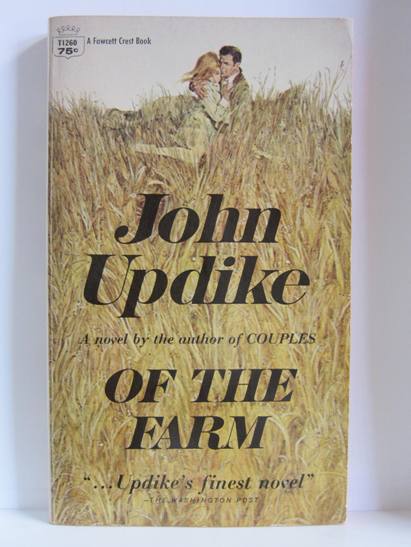