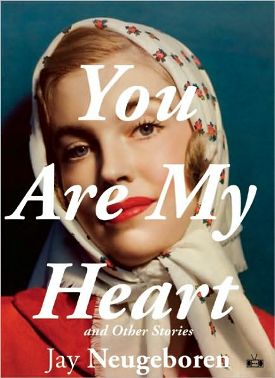 Midway through reading Jay Neugeboren’s new collection of stories, I became curious about his previous books and went looking online for information. I’m not talking about 1940, a fictional story about Adolf Hitler’s childhood physician, published in 2008 — I’m talking about Neugeboren’s roots, Big Man, published by Houghton Mifflin in 1966, his debut novel about basketball that’s still in print (a testament to its quality). Time magazine said, it “illuminates one of the great and terrible questions of life: What happens when you can’t do the thing you love?”

Neugeboren has written 17 books during his literary career, and his newest book proves he’s still in the game. In You Are My Heart and Other Stories, this ingenious writer takes readers into an engaging space that challenges our self-satisfied certainties, calling upon us to consider what really matters in this brief flicker of time that is our life. You cannot read these 11 intelligent stories, taut with political and relational issues, without being moved to think in new ways.

AIDS physicians, Jewish men and Irish women populate this collection, with settings in France, Africa, New York City and Brooklyn. Some of the stories explore the intricacies of love affairs (“The Debt” and “The Turetzky Trio”).  Some  illustrate  complicated family relationships (“Overseas” and “A Missing Year: A Letter to My Son”). But the most unusual stories, powerful in their concise plots and reality punches, are politically blunt, such as “Comfort,” a story about a burned-out AIDS physician who presses home the reality of our nonchalance toward a deadly disease. Or “The State of Israel,” in which a Middle Eastern physician from an Arab nation treats an American Jewish doctor, and the patient is subjected to questions about his allegiance to Israel.

Other stories are equally remarkable for their simple plotlines and thought-provoking results, such as “Summer Afternoon.” When a woman out-of-the-blue speaks those two title words in December to her husband and their friend, the three are observing a funeral in southern France. She explains that Henry James once said “summer afternoon” are the two most beautiful words in the English language. She goes on to say there are no funerals or wars in the novels or stories of James — and also Jane Austen — and yet everything that matters is present in their work. The juxtaposition of her comments with the funeral and, later, a right-wing gathering that turns violent brilliantly exposes our misguided and narrow ways of thinking and living.

Two very moving stories — the longest ones — bookend this great collection. I’d say they are my favorite but then it’s hard to qualify any one from the other, being the collection itself is my favorite. But these two are so very memorable, rich in nostalgia, atmosphere and a time of what once existed for a Booklyn kid growing up in the 1940s and 1950s. In the title story, the book’s first story, there’s a moment when a Jewish boy defends his best friend Olen, a black teammate on the high school basketball team. It is 1953, pre-civil rights days, and Olen has been let down by the coach, who fails to get this hard-working athlete into a good college.  The narrator confronts the coach – in a furious rant – and at one point says, “He played his heart out for you for three years and you let him down.” The scene captures an extraordinary moment of courage and devoted friendship, written by an author who, without a doubt, knows the human heart.