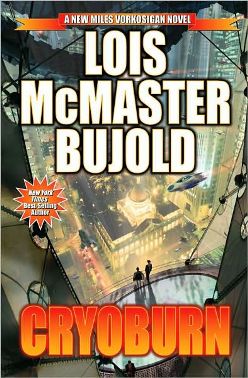 Two popular genres announced best books this week, and I’ve had some fun checking them out. Tonight, the Edgar® Awards announced their mystery winners, including The Lock Artist by Steve Hamilton for best novel. You can get the list of other Edgar winners in the various categories on Omnimystery News.

Regarding the Hugo Award® for science fiction and fantasy, I have close to zero reading experience in this genre, excepting Lois McMaster Bujold, an Ohio author nominated for her 12th Miles Vorkosigan novel. I’ve listed here Bujold’s book as well as the other Hugo Best Novel nominees. You can get the full list of nominees in the various categories on the Hugo award website. Hugo winners will be announced August 20.

Plot summaries are sourced from the publishers’ and authors’ websites.

Cryoburn by Lois McMaster Bujold
Ohio author Bujold brings back her signature hero Miles Vorkosigan in his 12th novel set on planet Kibou-daini where Vorkosigan investigates the activities of Kibou-daini cryocorp—an immortal company whose job it is to shepherd its all-too-mortal frozen patrons into an unknown future.

Blackout/All Clear by Connie Willis
In Blackout, Willis sends three Oxford historians from the year 2060 back to World War II England where they become unexpectedly trapped in 1940. In All Clear, small discrepancies in the historical record seem to indicate that one or all of them have somehow affected the past, changing the outcome of the war.

The Dervish House by Ian McDonald
The year is 2027, and Turkey is about to celebrate the fifth anniversary of its accession to the European Union. It’s the largest, most populous, and most diverse nation in the EU, but also one of the poorest and most socially divided. The economy is booming, and the eponymous dervish house is the center of intrigue, conflict, drama and a ticking clock of a thriller set off by an explosion on a bus.

Feed by Mira Grant
In postapocalyptic 2039, bloggers accompany a senator on the campaign trail in his bid for the White House. This senator is the first presidential candidate to come of age since social media saved the world from a virus that reanimates the dead. Zombies create mayhem, the senator’s daughter is killed and the bloggers, using the power of social media, wrestle with evil.

The Hundred Thousand Kingdoms by N.K. Jemisin
Yeine Darr is an outcast from the barbarian north. But when her mother dies under mysterious circumstances, she is summoned to the majestic city of Sky, seat of the ruling Arameri family. There, to her shock, Yeine is named an heiress to the king. But the throne of the Hundred Thousand Kingdoms is not easily won, and Yeine is thrust into a vicious power struggle with a pair of cousins she never knew she had. As she fights for her life, she draws ever closer to the secrets of her mother’s death and her family’s bloody history.