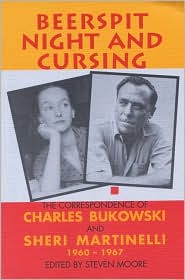 Now here’s a book title that screams bad-boy poet Charles Bukowski.  Beerspit Night and Cursing collects the correspondence between him and Sheri Martinelli from 1960 to 1967.

I don’t remember where I came across a mention of it this week, and the librarian who helped me find it couldn’t say how the book got lost in the stacks. No matter. It sits in front of me now, and I like the look and feel of this apparently much used library edition. Beat up and repaired, as the drinking, gambling, whoring, “laureate of lowlife” Bukowski would like it. (via Wikipedia)

Their correspondence began with a letter Martinelli sent Bukowski rejecting his poetry submission to her San Francisco literary magazine Anagogic & Paideumic Review.  She said “i don’t find a ‘thump’ in yr work” and suggested he:

Bukowski was in fact well-read, having spent much of his youth in libraries.   And so he informs Martinelli:

“I have read your classics, I have wasted a life in libraries, turning pages, looking for blood. It seems to me that there has not been ENOUGH garbage dumped, the pages do not scream; always the effected dignity and know-all and dry page sunburned and listless as wheat.”

You just gotta love the blunt-speaking Bukowski. The reason his poetry claims devoted fans, including this one.

Martinelli is not well-known today, but she was high-profile during her time, especially among the Beats. According to the book’s introduction, she was a protégée of Anaïs Nin and the muse and mistress of Ezra Pound. E. E. Cummings and Rod Steiger collected her art, which is now in collections around the world.