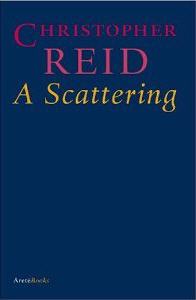 I like stories about unsung heroes who win the spotlight. In the book world, that would be the literary authors and poets who persistently produce exquisite work that typically falls into the remainder bins and obscurity but then, finally, gets big recognition. Such  success happened for Christopher Reid, author of A Scattering. The poetry collection had sold less than 1,000 copies when it won the 2009 Costa Book Award in Britain. This was not a poetry award — A Scattering won Costa’s “book of the year” award. Rarely does poetry  trump fiction.

Several weeks ago on TLC, I complained about spending money on poetry collections that ended up unread on my bookshelf, due to a poor fit with what I like to read in poetry.  A Scattering  shortly after came to my attention, a deeply satisfying discovery. Dedicated to Reid’s wife, Lucinda, the poems mourn her death in 2005. It’s not a plaintive collection of elegiac sadness, rather an admirable rendering of loss and grief.

A Scattering is told in four sequences that begin with a vacation in Crete, when they are aware of her illness, and then Lucinda’s time in hospice, Reid’s identity as a widow and finally reflections about “Lucinda’s Way.” Reid speaks to his wife in these verses, processing his experience. One cannot help but be drawn into this profoundly moving intimacy.

Having had the good fortune to live in the roman fleuve
of your life, my darling,
playing no small part, but — that’s not my name on the cover —
second always to you, the dashing heroine,
I have hesitated, havered too long, to compose
this necessary footnote.
You would have understood why.
(Read the rest of the poem here.)

BTW, a reminder that April is National Poetry Month. It’s a good time to support these heroes of literature. Regarding A Scattering, I don’t see evidence of U.S. publication; however, you can read more about the book on The Guardian’s website and purchase it from their bookshop, or from dealers on AbeBooks.com.

One thought on “Poets as literary heroes”