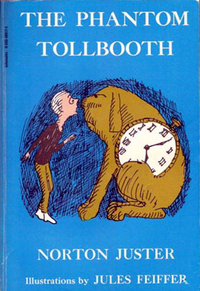 Fans of The Phantom Tollbooth, a children’s book first published in 1961, will be glad to hear the duo that created it — Norton Juster and Jules Feiffer — are collaborating once again. According to Publisher’s Weekly, their new children’s book – The Odious Ogre – will arrive next year, fall 2010.

The Phantom Tollbooth has remained in print all these years, selling millions of copies.  When it first came out in 1961, its original price was $3.95. Unfortunately, my childhood copy didn’t travel with me into adulthood. That scarce first edition in good condition now prices in the high ranges of 200 times the original price, and more.

In case you haven’t read The Phantom Tollbooth or have forgotten the story, here’s a summary:

A boy named Milo, bored to frustration with his life, thinks everything is a waste of time. A tollbooth magically appears in his bedroom, and he drives a toy car through it, entering a strange land. Dictionopolis (a place of words) and Digitopolis (a place of numbers) are among the places Milo encounters. There is also the Sea of Knowledge as well as the Foothills of Confusion, the Island of Conclusions, the Doldrums, and the Mountains of Ignorance. Milo is tasked by a king to rescue the princesses Rhyme and Reason. His traveling companion is the watchdog Tock. He helps to settle the war between words and numbers.

There are terrific, memorable passages and quotes in The Phantom Tollbooth, such as: “Time is a gift, given to you, given to give you the time you need, the time you need to have the time of your life.” More quotes can be found at QuoteLand.

It appears that The Odious Ogre will also play with a theme of words.  Publisher’s Weekly reports:  “The ogre, for instance, has an impressive vocabulary, ‘due mainly to having inadvertently swallowed a large dictionary while consuming the head librarian in one of the nearby towns.'” That said by Michael di Capua, whose Scholastic imprint is publishing the book.