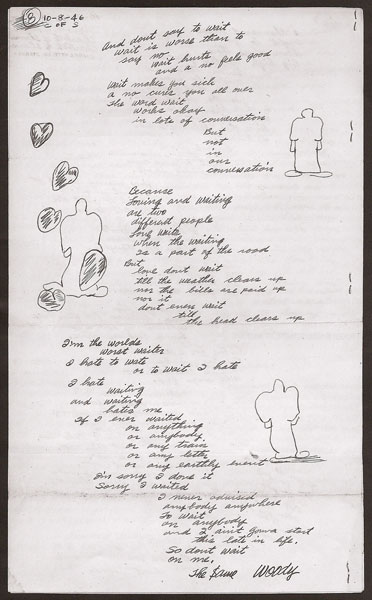 On October 8, 1946, legendary singer/songwriter Woody Guthrie  wrote an eight-page letter to Charlotte Strauss. The two had been corresponding since 1945, after Strauss read Guthrie’s autobiography Bound for Glory and wrote him a fan letter.

That eight-page letter went up for auction on January 15, 2009 at Freeman’s, as part of the Manuscript Archive of Woody Guthrie Letters & Short Stories circa 1945.  I learned this from an advertisement for the auction in a magazine last November/December. It included a page of poetry from the letter, and I was so taken by Guthrie’s words and drawings that I ripped the ad out of from the magazine and taped it to my office wall.

The trail of this auctioned letter fascinates me. A few weeks ago I saw in either The New Yorker or The New York Review of Books another ad saying Freeman’s had sold the Guthrie lot for $41,800.  A few weeks after that, I received Bauman Rare Books April 2009 Catalogue and saw that same photo of the Guthrie letter now stuck to my wall — Baumann is selling the letter for$16,000.  Page 63 of the catalogue: “Extraordinary 1946 Autograph Letter Signed by Woody Guthrie, Featuring a Lengthy Lyric Poem and Eight Original Sketches.”

I can’t imagine what it would be like to receive such a letter.  Yet maybe I can, which is why it’s on the wall above my computer, where daily I write and respond to today’s version of the letter … emails.  Not quite the same, though, is it, lacking all that life and personality.