In Kevin Barry’s recently released third novel, two old Irish drug smugglers sit on a bench in the seedy Spanish port of Algeciras. Maurice Hearne has learned his estranged daughter Dilly might be traveling to or from Tangier on this day, October 23, 2018, so here he waits with his best friend Charlie Redmond. They hand out fliers and approach travelers with a singsong litany: 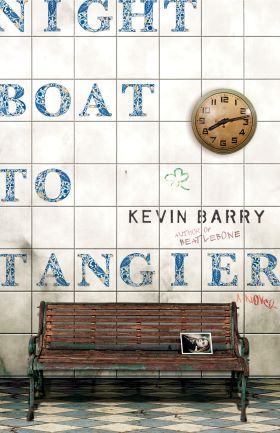 When a boy with dreadlocks gets off a boat in combat trousers and army-surplus boots, leading a dog on a rope, Maurice and Charlie pounce and interrogate, employing the one-on-one power of duo connectedness with incisive, tag-teamed questions and menacing calm. Here we learn violence lies just below the surface.

Charlie limps soulfully around back of the bench and rests a palm on Benny’s shoulder. He speaks calmly and kindly.

I don’t know if you’re getting the sense of this yet, Ben. But you’re dealing with truly dreadful fucken men here.

We’re an awful pair, he says.

Kevin Barry is an Irish novelist, playwright and screenwriter. His debut novel, City of Bohane, won the International IMPAC Dublin Literary Award in 2013 for a story The New York Times described as “an Icelandic saga welded to a ballad of the American West, although the location is in a place somewhere in Ireland, around the year 2053.” His next novel, Beatlebone, won wide, critical acclaim, a story about John Lennon and the island he bought off the coast of Ireland. Night Boat to Tangier was longlisted for this year’s Man Booker Award. (It should have made the shortlist; it’s that good.)

The port scene in Algiceras is derelict, dirty and suspect, but the prose is as alluring as the drugs that ruined these two men. Not a word is wasted in the stirring portrayal of their dark life, and the pages turn quickly under their playful and irreverent Irish repartee. Alternating with Algeciras conversations are lyric, reminiscent drifts that take us into Maurice and Charlie’s drug-fueled past.

It starts in 1994, when they make so much money they anger established dealers. The two run and hide, Maurice lying low with his love, Cynthia, in the quietude of an Irish Valley, Charlie somewhere in County Cork. They continue to prosper but must also continue to hide. Maurice flees with Cynthia to Barcelona, then London, then back to the west coast of Ireland. They invest in property and have Dilly. Meanwhile, there are mentions of lucrative drug shipments and of Charlie as a bad man.

Of the four main characters, Cynthia is the message bearer who warns Maurice there is no way to escape from himself, who cautions him about the violent Charlie, and who warns her daughter Dilly to find freedom outside the family. She is more backdrop than one to care about but a linchpin nevertheless in Maurice and Charlie’s complicated lives.

A turning point occurs in Maurice’s journey when he builds ocean-view houses on the Irish coast. It’s a moment that showcases Kevin Barry’s superb wit that here winks at greedy misjudgment using superstitious amusement. A problem causes the builders to hold back, and it has to do with “the moundy bit on the far side” of the land that has all the characteristics of a fairy fort. Quaint on the one hand, on the other hand the fort is a bad omen if disturbed. Maurice builds anyway, and the misfortune rolls in. Contractors on the building site suffer accidents. A speedboat containing Moroccan hashish is taken by the Spanish police. Maurice becomes obsessed with unfounded jealousies.

Charlie all the while remains a constant collaborator. We are aware of him less in the back story, more in Algeciras. It’s not the crimes he and Maurice once committed together, but their friendship and loyalty to one another that eventually define the true meaning of their vigil in this intoxicating novel. In the end, we know more about Dilly than they do, as Kevin Barry artfully concludes this long day for the two men. When the last ferry moves out, and the terminal is empty, Maurice Hearne and Charlie Redmond remain alone, together.

Night Boat to Tangier by Kevin Barry is published by Doubleday. A version of this review was broadcast in central Ohio on NPR member station WOSU 89.7 FM.

2 thoughts on “Waiting for Dilly Hearne”