I wish I had the joy of starting these memoirs all over again. During the days I was reading them, I kept thinking about the stories while I was doing other things. They are that kind of book. Each sings with an immersive voice, taking us back to what Benjamin Taylor in The Hue and Cry at Our House: A Year Remembered describes as “the sunlit, lavishly hospitable past.” For me, they were indescribably consuming.

Taylor’s memoir and Joyce Johnson’s Minor Characters: A Beat Memoir each focus on a particular time in history: Taylor’s is set in Texas 1963 to 1964, and Johnson’s takes place in New York City 1957 to 1958. 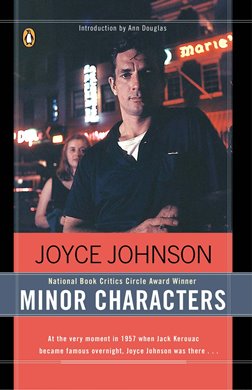 Joyce Johnson won the 1983 National Book Critics Circle Award for Biography/Autobiography for Minor Characters. Recently, New York Times Book Critic Dwight Garner wrote about the memoir in his American Beauties column that brings attention to undersung American books of the past 75 years. How could I not read Johnson’s memoir, when Garner claims: “Minor Characters is, in its quiet but deliberate way, among the great American literary memoirs of the past century.”

Even with that praise, I didn’t expect to be so affected by Johnson’s story. It’s about her relationship with Jack Kerouac, the year he published On the Road, and the women of the Beat Movement who lived in the shadows of Kerouac, Lucien Carr, Allen Ginsberg and other boys of the Beat. When I finished Minor Characters, I began re-reading On the Road, urgently wanting to stay within Johnson’s seductive world.

Kerouac and Johnson met on a blind date in a Howard Johnson’s diner, January 1957, when Johnson was 21, Kerouac 34. Kerouac’s iconic On the Road was published in September 1957. For nearly two years, the couple shared a close but sporadic relationship, due to Kerouac’s drifting nature, his tendency toward drunken chaos and his inability to make a commitment. Johnson evenly tolerated his behavior, always waiting for him to come back. And he did for the most part, until they separated for good, when Johnson finally was unable to cope with Kerouac’s instability.

She tells her story without the grandiosity of having been part of the inner circle of a literary legend. Instead, the narrative gracefully and sincerely offers a rare, genuine portrait of Kerouac, as well as of Johnson, a wayward girl who wanted “a taste of real life.” Early in her teen years, she abandoned the conventional 1950’s expectations of her Jewish parents in their apartment home on 116th Street. She was drawn to the Greenwich Village Bohemians and then, seamlessly, merged with Kerouac’s crowd. “It was my revolution,” she tells us in the book’s introduction. 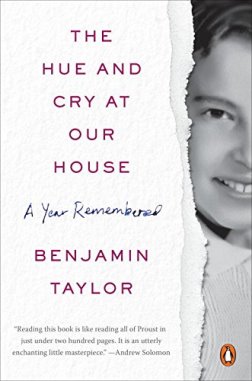 There is no revolution for Benjamin Taylor in The Hue and Cry at Our House, published this year, rather an emotional shock that forever marked his life. Taylor and his mother attended President John F. Kennedy’s speech outside the Hotel Texas in Ft. Worth on Friday morning, November 22, 1963, before Kennedy went to Dallas. The 11-year-old Taylor shook the President’s hand and then went to school, filled with the ecstasy of that once-in-a-lifetime moment. To this day, he writes, “I have dreaded weekends,” ever haunted by the emotions of that fateful day.

Taylor uses the following 12 months as a means to anchor the story about his life. “One year suffices,” he tells us in his opening line, explaining that, when illustrating a person’s temperament, “Any 12 months could stand for the whole.” And that’s exactly what he accomplishes here, bringing all of his life into focus within this one year, as well as atmospherically evoking the changing times of the 1960’s.

So many of his chosen memories offer poignant richness and depth, whether he’s writing about teachers at Westcliff Elementary School or his relatives — from his mother with standing Friday beauty appointments to his grandfather’s strict lunch routine involving a shot of Crown Royal, a well-done sirloin and a buttered baked potato. The Beatles were “conquering our radios,” and Taylor and his older, strong-willed, handsome brother watched The Twilight Zone, The Patty Duke Show and The Virginian on their new color television.

More than a nostalgic walk down memory lane, however, this brief gem of a memoir  captures how, for Taylor, the past has become more vivid and valuable than the present, now that he’s beyond middle-age: “The future is dark, the present a knife’s edge. It’s the past that is knowable, incandescent, real.” Joyce Johnson might say the same, although for her there’s a different kind of yearning connected to her Beat years, which comes through in this meaningful last line of Minor Characters: “I’m a forty-seven-year-old woman with a permanent sense of impermanence. If time were like a passage of music, you could keep going back to it till you got it right.”

2 thoughts on “My two favorite memoirs this year”