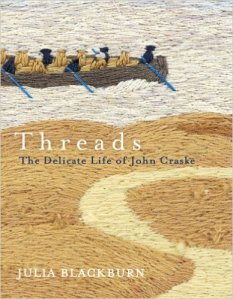 This week, I’ve been reading Threads: The Delicate Life of John Craske by Julia Blackburn. It’s a captivating biography, uniquely written, beautifully illustrated and constructed with glossy paper and a stitched binding that make the book a handsome object. The “uniquely written” part refers to the fact that author Julia Blackburn had not much to go on for her subject, no hordes of correspondence or archived papers. She acknowledges early on she had more evidence of her subject’s absence than anything else. And so she takes us with her on the search for information, building on bits of facts and memories gathered from her visits to the places and people connected to John Craske, the Norfolk fisherman turned fishmonger turned invalid turned artist with whom she became fascinated.

John Craske was born in 1881 in Sherringham, a seaside town on England’s east coast. At age eleven, he went to sea as a fisherman, following in the career path of his father and grandfather. In 1905, he left the sea to start a fish business in nearby Dereham and, in 1908, he married his wife Laura. In 1917, John Craske got called to serve in the Great War but ended up in the hospital with influenza. He never fully recovered from the illness, from then on falling into “harmless mental stupors” that no one could diagnose. For the rest of his life, he was debilitated by weakness, relying on a wheelchair and staying in bed much of the time.

In 1923, John Craske began creating paintings of boats and the sea that he loved. Julia Blackburn writes: “I cannot begin to explain how much the pictures impressed me. They were images of the sea and boats on the sea and the coast seen from a boat, but they were also images of life itself and its precariousness and how we struggle to keep afloat and to stay alive in the face of fear and uncertainty.”

When John Craske could no longer stand and paint, he turned to embroidery, which he could do while in bed. Of the many pieces he created, there’s an embroidered portrayal of the World War II 1940 evacuation of Dunkirk that’s approximately 11 feet long and 25 inches wide. He created it from what he heard in radio newscasts and stories of veterans. It was John Craske’s last work. He died in 1943 before it was finished.

The author’s husband, Herman, is here and there mentioned in the book, accompanying her or listening to her. And then, in the last 100 pages, there’s a sadness when he dies. Julia Blackburn finds refuge and comfort in John Craske’s life and the book she needs to finish.

Several of John Craske’s paintings and embroideries lie in the back rooms of homes and museums, neglected, faded and stacked against a wall, where Julia Blackburn found them. But Threads isn’t about fame, or the loss of it, rather about beautiful art, the tough world of early 20th century Norfolk fishermen, and one man’s life and talent that got mislaid over time, now rediscovered in a wonderful biography.

Note: Threads: The Delicate Life of John Craske by Julia Blackburn is published in England by Jonathan Cape and not yet published in the United States.

One thought on “Images of the sea and life itself”