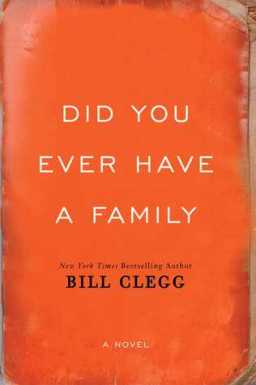 “Did You Ever Have a Family” appeared on the Man Booker longlist of prize candidates for 2015. It did not make it to the shortlist. (The winner from the shortlist will be announced October 13.) This beguiling novel is now among the longlist of nominees for the National Book Award in fiction. (The shortlist will be announced October 14.) I provide this information simply to showcase the attention the book is getting from this season’s major literature awards.

I recently recorded the following review of “Did You Ever Have a Family” for broadcast on WOSU 89.7 fm.

Mid-way through Bill Clegg’s debut novel, his main character June Reid, a divorced mother in her 50’s, poses the question that is the book’s title. She asks it out of fatigued exasperation, weeping on a log in the woods outside her house in Wells, Connecticut, speaking to the sister of her daughter’s fiancé. Did you ever have a family? It’s an odd question because — of course Pru has a family. Her brother Will is marrying June’s daughter Lolly — and Pru’s parents are flying in the next day for the wedding.

What Clegg frames for emphasis here is June’s despair over the conflict between herself and Lolly. They haven’t gotten along since the divorce, and now June doesn’t want her ex-husband sleeping at the house the night before the wedding, but Lolly insists.

Ultimately, this deeply felt story is about bearing up through tragedy, but by taking this question for the book’s title, Clegg wants to draw us to that moment in the woods as if to say, no matter the state of a family, if you lose it, you lose everything, and June loses everything. The night before the wedding, her house explodes from a gas leak. The wedding couple, June’s ex-husband and her boyfriend Luke die in the blast. Why June is alive is one of the questions pushing forward the narrative, along with the larger question of why the gas leak occurred.

Clegg deftly uses a handful of character viewpoints in dedicated chapters to tell the story. There’s the wedding florist and caterer, the father of the groom and owners of a motel on the Pacific Ocean where Will and Lolly once stayed. June leaves Connecticut and settles at the motel. She abandons Lydia, the mother of Luke whom gossips speculate caused the catastrophe. Lydia, for comfort, clings to the attention of a persistent, flirtatious phone solicitor.

Each character’s offering is compulsively readable as Clegg progressively connects the players not just through heartbreak but also secrets and regrets from the past. The story isn’t as much melancholy as poignant, illustrating the classic truth that disasters make us see what we can lose. It’s also redemptive, as Clegg enlightens June and Lydia in truth and hope. “All we can do is play our parts and keep each other company,” one character says in the end, providing simple wisdom for daily purpose.