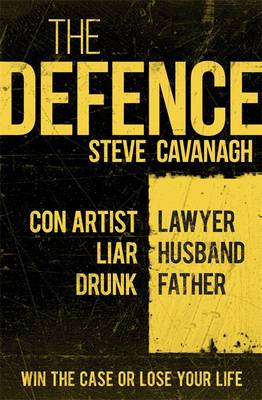 Every once in a while — but not very often — I read a book that’s so good I don’t stop to take notes. I also refrain from putting sticky notes beside significant passages for quick reference. I’m so caught up in what’s going on that any pause feels like too much of an interruption. The Defence is one of those books, a fast-paced, clever albeit far-fetched legal thriller set in New York City. I read it breathlessly, breezing through the concise chapters, filled with anticipation of what would happen next, riveted and wondering to the very end.

Within the first few pages, ex-con, trial lawyer, former alcoholic protagonist Eddie Flynn is kidnapped by Russian mobsters who’ve placed a bomb inside Eddie’s coat. Their boss, Olek Volchek, is on trial for murder, and Eddie, who hasn’t practiced law in a year, is being forced to represent him. To ensure cooperation, Volchek’s thugs have kidnapped Flynn’s 10-year-old daughter Amy.

Four different law firms already have said Volchek is impossible to defend. His case is a slam dunk for the impressive prosecutor, Miriam Sullivan. Her star witness, Little Benny, was the hit man hired by Volchek, and he got caught at the scene of the murder. Little Benny’s fully prepared to give up his boss. Volchek’s plan for Eddie is not to secure a verdict of innocence. He wants Eddie to bring the bomb into the courtroom and blow up Benny. Eddie, however, convinces Volchek to at least let him try to win the case. He has 31 hours to pull it off.

Eddie’s definitely in a bind, but being an ex-con, he’s got instincts, insights, quick-thinking and sticky fingers that allow him to manipulate his captors. His talents create surprising twists and turns, as do the many things Eddie discovers about Volchek and his men. Eddie’s back story of why he became a con artist, what caused him to leave the con game, how he became a trial lawyer and why he quit and became a drunk calls upon our sympathy and makes him all the more likable. Best of all, the way Eddie ticks makes him a fun guy to take us on this narrative roller-coaster ride filled with clever hi-jinks, scamming, conspiracies and a line-up of tense moments that feel like Eddie is doomed.

I’m not one to have patience with improbable scenarios. The exception, however, is when the plot construction and character composition is so well done I ignore that little voice inside my head that rings the implausible bell because, who cares! The tension never lets up in The Defence and, equally important, neither does the entertainment that includes a “turned” FBI agent, a jury consultant who reads lips, Ninja bikers and a Mafia strongman who goes by the name Lizard (you don’t want to know). Author Steve Cavanagh pulls it off brilliantly, while Eddie channels the advice of his father, a con man himself, who told Eddie to always “hold it together no matter what.” And he does.

Now comes the part where I may disappoint you, my fellow Americans. The Defence is published by Orion books in the United Kingdom and slated for publication by Flatiron Books (Macmillan) in the United States in 2016, according to an email from the author. That said, new and used copies can be purchased on Amazon, some shipping from the U.K. Readers who use the library, Kindle or Barnes & Noble Nook will need to wait for the U.S. release.

Finally, a tip for readers who love mysteries, suspense and thrillers: The Mysterious Bookshop in New York City is where I found my copy of The Defence. I shop there as a book collector, able to get first editions of new, signed books by authors in the United Kingdom. They’ve sold out of The Defence; however, The Mysterious Bookshop has several Crime book clubs that might interest you, including The British Crime Collectors Club “for collectors of ‘true first editions’ published in the United Kingdom, as well as those who can’t wait for the US release date.” That would be me. Maybe it’s you, too.

2 thoughts on “A legal thriller I couldn’t put down”

If you’re receiving TLC blog posts in an email delivered at 2 a.m. that contains three headlines, it means you signed up a long time ago (thank you!) via a pre-Google Feedburner account system that has now shut down. You will continue to get these emails announcing new blog posts; however, due to the shut-down, I no longer can access the feed settings to make fixes or updates.

I recommend you unsubscribe from The Longest Chapter at the bottom of that email. Next, return to the blog, and you will see an email sign-up option (you may need to refresh your screen). Re-subscribe by providing your email address.

Feel free to email me with your questions at wosubookcritic@gmail.com.