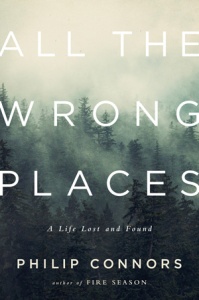 Four years ago, Philip Connors published a memoir called Fire Season about working as a fire lookout for the U.S. Fire Service. It was one of those books I didn’t get to, despite the way it called to me – the allure of a modern-age Thoreau in complete solitude, off the grid in a tower above the Gila Forest in New Mexico. But now, having finished Connors’ All the Wrong Places, I’m glad I didn’t read Fire Season because this new memoir is the prequel to those years of solitude. It’s about a central event that defined Connors’ life — that being his brother’s suicide when they were in their 20’s — and the troubled years that followed. All the Wrong Places likely makes his story as a fire lookout even more meaningful.

Connors describes himself and his brother Dan as oddball opposites. They lost touch and any sense of closeness after leaving Minnesota where they grew up on a pig farm — Philip on a trajectory of college and New York City journalism, Dan bypassing college and becoming a blue-collar worker for a family company in Albuquerque. Dan also became a skilled hot air balloonist. Philip broke the distance with a visit to Albuquerque to celebrate his younger brother’s engagement to the boss’s daughter. The book opens with a magical morning balloon ride over Albuquerque.  Months later, the first day of his internship at the Nation magazine, Philip learns his brother shot himself to death. But before that, and after the balloon ride, Philip ignored a phone call from Dan. He said he’d call him back and then didn’t. He also didn’t call his brother after his parents told him that Dan had been left by yet another woman, the one he fell for after his fiancée broke off their engagement. 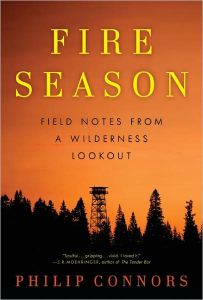 Connors is consumed not so much by why the suicide happened but that it did happen. He feels a burden of fraudulence, as if what is seen of him on the outside — a self-possessed, competent young man — hides the reality that he failed his brother. He’s driven into places where he doesn’t belong, enforcing the outsider status he believes of himself. That includes his job as an editor at the Wall Street Journal where his socialist inclinations run polar opposite to the newspaper’s editorial conservatives. He hangs posters of  the anarchist Emma Goldman and consumer advocate Ralph Nader in his cubicle, and his encounters with Bob Bartley, “the most important person at the world’s most important publication” are entertaining, illustrating not only his out-of-place status but also his youthful innocence. Meanwhile, Connors lives in Brooklyn’s Bedford-Stuyvesant neighborhood, perpetuating his unsettled sense of self as one of a handful of whites among thousands of black residents.

Connors writes with humor, irony and enticing vulnerability that draws us into his life during the six years following the tragedy, illustrating its effect on him. He achieves a superb middle ground between journalism and the intimacy of confessional expression, including when he turns to an amateur phone sex line for companionship. His insecurities, fumblings and misgivings provide levity and humanness.  Then arrives Part Three of the three-part memoir, delving deeply into what happened to Dan. Connors seeks the details from police and medical examiner reports, as well as from interviews with his brother’s ex-fiancée and girlfriend. It’s equally compelling as the first two parts but with darker content. It also reveals a secret that releases Philip from his heavy burden. He comes to realize the phone calls he didn’t make, the words never said, didn’t contribute to his brother’s death. “At long last I had a way of being in the world that didn’t feel fraudulent,” he writes.

Connors visits a friend in New Mexico who holds the lookout post at Gila. She wants out and, to his surprise, recommends him for the job. It’s an unexpected gift for Connors, coming at the right time in his life, yet to others it appears irrational — leaving a prestigious journalism job to work for peanuts isolated in the wilderness. But by the time we get to the last pages, it makes perfect sense. And now, it makes perfect sense for me to read Fire Season. I’m glad I waited.