Winners of the Mystery Writers of America 2014 Edgar Allan Poe Awards, honoring the best in mystery fiction, non-fiction and TV published or produced in 2013, were announced last week. Their categories include not just best novel but also best first novel and best paperback original. Also, they give an award to a best short story, something you don’t typically see in national awards.

Each year, I vow to read a few of the nominees ahead of the award ceremony but never seem to select those that win; however, this year, I got it right with my reading picks in three of the categories. (You can see the full list of all awards given last week, including the nominees, on The Edgars.com.) 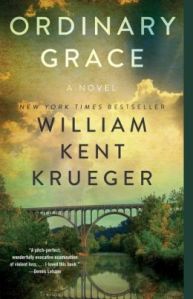 Best Novel: Ordinary Grace
by William Kent Krueger
Ordinary Grace is an enveloping literary novel with a mystery at its center. The warm yet complicated life of a preacher’s family and the drama of a small town from a boy’s perspective make the reading seductive and “unputdownable.” Set in New Bremen, Minnesota, in 1961, narrator 53-year-old Frank Drum looks back to that summer when he was 13 and driven by curiosity to get involved in the adult world unfolding around him. This includes a wide exposure to death, which, in separate incidents, happens accidentally, naturally and criminally.

The first death is that of young Bobby Cole, run over by a train on the railroad tracks where he often played. The terrible accident hovers over the hot summer days with police officer Doyle wondering if it was indeed an accident. Frank, with his younger brother Jake, wanders to the tracks and the nearby river to investigate on his own and discovers the second death of the summer, an itinerant man whom Frank’s father buries in one of the best places in the cemetery. Frank’s father is the town’s Methodist minister. His patience, adherence to truth and spiritual steadiness epitomize the ordinary grace one can live day in and day out, even when tragedy occurs. That tragedy is the most shocking death of the summer, at the heart of this moving story.

William Kent Krueger’s style is pitch-perfect in creating engaging action tucked within a nostalgic tone. Much of that action we are advised of by Frank’s compulsion to eavesdrop, which eventually becomes transparent as a writer’s technique. At least, it did for me, but this awareness of technique didn’t interrupt my engagement with the story, nor change my admiration for it – the eavesdropping occurs naturally within the plot, and effectively. So far, Ordinary Grace is one of the most enjoyable books I’ve read this year, a kind of story you fall into and don’t want to leave once you’ve begun reading it. 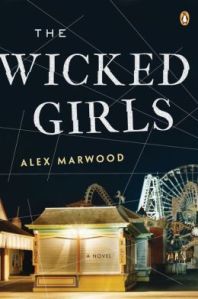 Best Paperback Original: The Wicked Girls
by Alex Marwood
I purchased this book a few months ago, after the nominees were announced, but it’s still waiting to be read. I tend to hesitate when picking up a book written in the present tense, which this one is, for reasons I can’t really grab onto other than I have to be in the mood for that immediate kind of narration. Once I begin reading, I’m fine – the tense doesn’t bother me – but I have to jump in. It’s like hesitating before you jump into the cold water of a Canadian lake for that wonderful swim.

Alex Marwood’s story is about two girls who meet for the first time when they are 11 years old, and by the end of the day they are charged with murder. They meet again, 25 years later, about which the book description says: “… it’s the first time they’ve seen each other since that dark day so many years ago. Now with new, vastly different lives – and unknowing families to protect – will they really be able to keep their wicked secret hidden?”

What made me select this book as my nominee pick was the sense I’d be surprised by the ending and gripped to the very end. Considering it won the Edgar, likely that’s the case, and if I don’t get to it before summer begins, The Wicked Girls definitely will go in the proverbial beach bag. 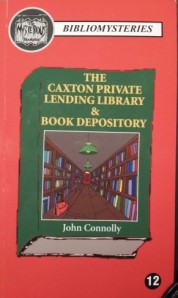 Best Short Story: The Caxton Private Lending Library & Book Depository by John Connolly
This short story is published by Mysterious Bookshop as #12 in its series of bibliomysteries. It’s a delight, a story about Mr. Berger who lives an ordered life with books as his constant companion – a life in which the most difficult decision is selecting the next book to read. <big sigh!> When his mother dies, he moves into her house in a new town and becomes acutely aware of his isolation, having chosen the world of books rather than the company of people all his life. He begins to think he may be going insane when, one night, taking his usual walk along a railroad track and then waiting for the evening train to pass, he is sure he sees a woman commit suicide by throwing herself under the train. Only, there are no remains after the train passes. He sees her on another night, again attempting suicide by train, and assumes she is a woman with an Anna Karenina fixation. His pursuit of her leads him to The Caxton Private Lending Library & Book Depository, where the line between the worlds of our beloved books and daily reality disappears.

Those who, like Mr. Berger, enjoy books as a constant companion, as well as book collectors, will relish a plot dedicated to their passion, and also enjoy the brief descriptions of valuable classics in their first editions. The Caxton Private Lending Library & Book Depository is printed by the Mysterious Bookshop. It is available in electronic format as The Museum of Literary Souls via Amazon.