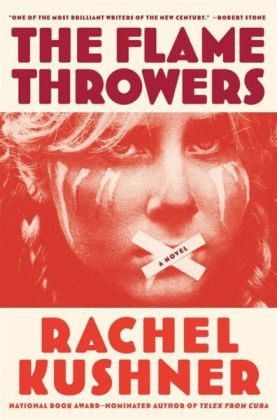 Speed Week took place at the Bonneville Salt Flats in Utah a few weeks ago. The New York Times gave the time-trial event a full page in their sports section (predominantly photos). Normally, I would’ve glanced at it and turned the page without stopping; however, I’d just finished Rachel Kushner’s remarkably astute and deeply engaging new novel, The Flamethrowers.

The narrator is a Nevada girl everyone calls Reno, nicknamed for her hometown where she grew up among reckless and unsentimental people. She’s in her 20s, a motorcycle rider and aspiring artist who, as she’s introduced to us, is riding her Moto Valera to the Bonneville event. She wants to drive the elite Italian motorcycle at high velocity and then photograph the tracks in the salt as an art project, something to do with the landscape relating to speed and movement. Reno lives in New York with her boyfriend Sandro Valera, a successful, middle-aged artist who’s somewhat estranged from his rich Milanese family and uncomfortable with Reno’s love of his father’s self-created bike.

The story primarily takes place in the mid-1970s New York, specifically the SoHo art scene. Reno is a captivating narrator, driven by the unformed life goals of an innocent. Kushner sensitively uses her to explore and connect incongruous concepts —  art, speed and revolution. In doing so, she builds an alluring world of radical individuality, ambition, love and idealism. The Flamethrowers is hard to put down at times, not because it’s a page-turner — far from it — but because of how Kushner so creatively spins these ideas and involves us.

When Reno takes her turn on the salt flats, a massive gust of wind shoves her sideways and forces her down. To get the medical help she needs for her injuries, she claims to be a member of the Valera racing team that’s present to break a land speed record with their driver Didi Bombonato in a rocket-engine vehicle, the Spirit of Italy. The team takes her under their protective wing and gives her a chance to drive the Spirit of Italy. She sets a new speed record for women, and Reno returns to New York triumphant. The Valera team invites her to participate in a company event the following spring — an opportunity she can’t pass up; however, her association with the Valera team, she tells us, is “the beginning of the end for me, some kind of end, although I didn’t see things that way at the time.”

The narrative frequently detours into other stories, times and places, most significantly in the telling of how Sandro’s father grew his company, taking us to Alexandria, Egypt; Milan and forests in Brazil. Another example is a minor character’s involvement in 1960s New York, the revolutionary East Village. These detours richly unfold and yet dangerously flirt with losing the reader, being they are unnecessary to advancing the Reno-Sandro plot. And yet, they are developmentally important to the concepts Kushner is so brilliantly bringing together.

After Bonneville, Reno gets more involved in the SoHo art scene, attending gallery openings and dinners with Sandro and his friend Ronnie Fontaine. A street mugging influences the reluctant Sandro to support Reno in the upcoming photo shoot and publicity tour with his family’s company and go with her. While they are in Italy, militant factory workers rise up in protest, including the Valera workers, and Reno’s days of love and art turn into betrayal and social anarchy. This is not to her ruin, though, rather a transformation is at hand — Reno begins to recognize the need to move on and becomes once again just a girl on a motorcycle entering a new landscape.