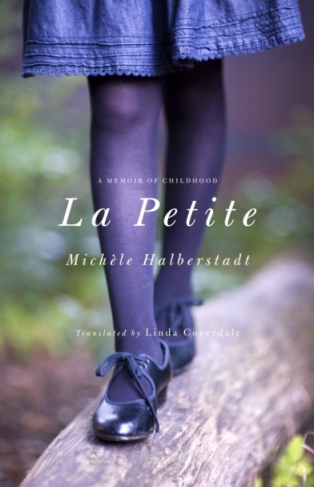 Information about French author Michèle Halberstadt on the rear flap of her new book La Petite led me to research French awards. She’s won several, including the Drouot Literary Prize for her novel The Pianist in the Dark. The Drouot is given for a work of fiction in which the narration refers to the universe of art. Halberstadt also received the Légion d’honneur, France’s highest honor given to both soldiers and civilians for outstanding achievements. For civilians, it recognizes work that enhances the reputation of France through arts, sciences, business and other fields. Paul McCartney is a recipient, as is Gustav Flaubert, who famously penned Madame Bovary. And then there’s the Ordre National du Mérite that’s given for distinguished achievement.

These honors provide a weighty albeit unofficial afterword to La Petite, a memoir about Halberstadt’s childhood attempt at suicide. They demonstrate her life victory over letting others define what and who you are.

Barely more than 100 pages, La Petite takes place in Paris 1968. It opens with a 12-year-old Halberstadt swallowing assorted pills from the family medicine cabinet with five glasses of water. She then goes to school, forcing herself to stay conscious as long as possible, so she can succeed in her mission to disappear from what she considers to be a collapse of her self-respect. Before noon, she falls asleep in science class.

Halberstadt drops back in time to write about the events that drove her to suicide, beginning with the unexpected death of her adored grandfather, who cherished her. She could tell him everything. He was her anchor, saving her from isolation — Halberstadt describes herself in 1968 as a gray mouse in brown glasses inadequate in school classes and lacking not only distinction but also friends.

She became quiet and withdrawn in her grief. Everyday scenes at school and home illustrate the gross misunderstanding of her behavior by teachers and family. They think she’s become incorrigible, little aware their disapproval and rejection is accumulating and increasing her despair.

This accomplished author effectively employs spare, precise sentences. She aims for intuitive comprehension from her readers, not emotional commiseration, and she succeeds, inviting us into this delicate, unadorned world with incidents in which there is no blame, only statement. We arrive again at the scene of her suicide attempt toward the book’s end but now intimately familiar with her isolated internal world. At the hospital, we celebrate the young Halberstadt’s transformation when she realizes in a private moment, “My life depends on me, not on others.” And when she tells herself, “Expect nothing from others; charge into the fray. Run smack into life instead of watching it pass by.”