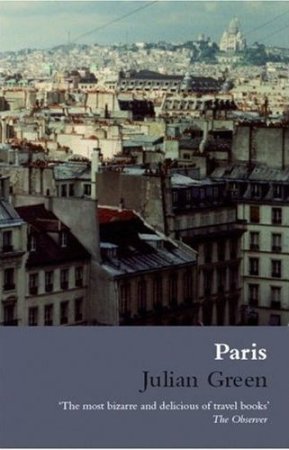 December 1990, I spent 14 days in Paris. It was a solo adventure with the goal to experience the real Paris, that is, the Paris of the Parisians, what French-American author Julian Green calls “a secret city.” In his book about the City of Light, where he was born in 1900 of American parents and spent most of his literary career, Green writes: “Anyone can get hold of a guide and tick off all the monuments, but within the very confines of Paris there is another city as difficult of access as Timbuktu once was.”

That was the Paris I wanted to see, what Green says “defies analysis but enables you to say without any hesitation: ‘That is Paris’…” Had I read Green’s collection of essays before I landed at Charles de Gaulle airport, I would’ve known I would not succeed because this secret city within Paris is available only to those who stroll without purpose, waste time and even suffer a bit in the places that contain its soul, according to Green. Such is not the venue for an American spending a limited number of days in the city for the first time. I had a list of what I wanted to see. Granted, it consisted of places and things not usually visited or encountered by tourists, but I was trying too hard.

I ventured into Le salon d’honneur of La Bibliothèque nationale de France, where I stood before a statue of Voltaire that contains the philosopher’s heart in its pedestal. I toured the Counterfeit Museum and the Cemetery of Père-Lachaise, where I discovered this wonderful epitaph (translated from the French): They were astonished at the marvelous journey that lead them to the end of life.

In my organized days, with my list of the unusual, I missed those ordinary things that tell the intimate, real story of Paris, the hidden stairways, winding streets, ancient pillars and old windows with lace curtains framing a bunch of flowers. Green writes invitingly, with a nostalgic, seductive tone, about these ordinary places and things, as well as about the gusts of rainstorms, thick fog and sparkling night lights spanning the Seine. He creates memorable images of Paris’s medieval days, such as in the church of Saint Julian the Poor on the Left Bank “when a priory adjoined it and fifty monks filled its vaults with the sound of their chanting.”

Paris is a small book of 19 essays, some only two pages long, yet no matter the length, each is equally powerful due to Green’s ability to create a captivating atmosphere with his words. Even though it is not today’s Paris (the essays were written over four decades, starting in the 1940s), Green takes us into the Paris that does not seem to age, or disappear. Or so it would seem. Green worries over modernizations of the city (“fortress-like blocks of flats”), especially the destruction of trees to make room for buildings and concrete, as well as the renovation of the Café de la Paix near the Opera House. “I tremble at what that implies,” he writes.

Julian Green’s book gave me the gift of escaping to Paris in the footsteps of someone who knows it intimately yet from the rocking chair on my front porch these hot summer nights. This bilingual edition, with French and English translations on opposing pages, is illustrated with Green’s personal black and white photographs that include a view from his apartment window in 1929 and another from 1974.

According to The New York Times, all but two of Julian Green’s 18 novels, 5 plays, 14 volumes of diaries, 4 books of autobiography, 6 collections of essays and 2 history books were written in French. Several, along with Paris, are available in English, including the novel The Distant Lands, the autobiography The Green Paradise and the essay collection, The Apprentice Writer. Julian Green died in 1998.