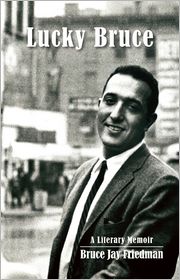 I didn’t ever see the movies Stir Crazy (1980) and Splash (1984). Both popular flicks were “penned,” as the industry likes to say, by Bruce Jay Friedman, whose delightful memoir is out this month. Considering I’m also unfamiliar with Friedman’s nine novels, let alone his six collections of short fiction, it’s a wonder I pushed aside my organized reading plan and put Lucky Bruce: A Literary Memoir first in line.

But then, I like what’s coming out of Biblioasis, the book’s publisher. They caught my attention a while back with Alexander MacLeod’s Light Lifting, a collection of short stories that drove me to act similarly — I began reading MacLeod’s collection within moments after receiving it in my mailbox. Also, likely influencing my decision of what to read next, I desperately wanted a book on the lighter side. Friedman’s take on his life clearly fit that need with his humorous, self-effacing, name-dropping, candid storytelling. I dove into his memoir eagerly and was rewarded sumptuously on every page.

Friedman is a long-time successful writer, screenwriter and playwright whose heyday occurred during the second half of the 20th century. His memoir flourishes on the insider wit about the famous friends met along the way, as well as his hilarious sometimes jaw-dropping experiences in the world of Hollywood screenwriting and New York City literati.

There are so many entertaining riches in this book it’s impossible to cast a far enough net to capture them, from encounters with actresses Natalie Wood and Marlene Dietrich to competitive storytelling with playwright Harold Pinter. And then there’s the time Friedman engaged in a public fist fight with Norman Mailer. One of my favorite anecdotes involves Richard Yates, author of Revolutionary Road. He just appeared one day at the Magazine Management Company, an organization that published men’s adventure magazines where Friedman worked for many years. Friedman writes:

“He sat down behind an empty desk as if he worked on the magazines and hung around for weeks. It was difficult to know what to do with him. He was a disheveled-looking man with a handsomely ruined face and the hangdog demeanor of a sheepdog who had wandered in off the street. I knew of his quality. I had read Revolutionary Road and the word-perfect Eleven Kinds of Loneliness. But there was no job available at the time; nor did he ask for one. He just wanted to sit there, as if we were operating a shelter of some kind. He rarely spoke.”

And here’s some more of those riches. Friedman hired Mario Puzo as a writer at Magazine Management, and one day Puzo asked Friedman’s opinion of the title The Godfather for his novel-in-progress. Friedman went negative on it and said, “I’d take another try at it.”

Before his career as a magazine writer and editor, Friedman studied journalism at the University of Missouri and then served in an administrative position in the U.S. Air Force during the Korean War. His first book Stern was published in 1962, while he worked at the Magazine Management Co. Shortly after, he left his corporate job to write full-time as an independent, which took him down the varioius paths of writing books as well as for the stage and screen. His agent, Candida Donadio, also represented literary greats Joseph Heller, Philip Roth and Thomas Pynchon.

Now this talented raconteur can add Lucky Bruce to his pile of lifetime successes. Dedicated to authors Mario Puzo and Joseph Heller, it’s one of those memoirs that’s a large, refreshing pleasure, and worth pushing aside everything else to read it.