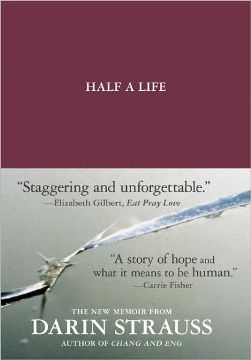 Great first lines have launched many classics and lodged in readers’ minds like advertising jingles: Call me Ishmael; it was the best of times, it was the worst of times; Lolita, light of my life, fire of my loins; mother died today; half my life ago, I killed a girl. That last one doesn’t appear on the memorable first line lists right now, but someday it will. It’s the first line of Darin Strauss’ altogether startling and affecting memoir about a car accident that’s defined his young life.

Strauss was driving to a game of putt-putt in May 1988, a month before his high-school graduation, when Celine Zilke, a 16-year-old schoolmate sharing the road on her bicycle, suddenly hit the hood of the car and bounced across the windshield. Several witnesses from other cars as well as Strauss’ passengers saw Celine ride her bike into his lane. Even though blameless, ever since, Strauss has been tormented with Celine’s death, living daily with the unshakable awfulness of it.

Half a Life is a powerful confession written in lyric bursts, some chapters a page and a half, some only a paragraph, others several pages. Strauss takes us through that fateful day, the funeral, the Zilke’s lawsuit and his confused, guilt-ridden passage from adolescence into adulthood as he tries to comprehend what happened. He spends his 20s and early 30s – in college, new jobs, new cities, new girlfriends — wrestling with self-judgment and anxiety that turns his hair gray when he’s 28-years-old.

This literary immersion in self-involvement is done exquisitely well, without an iota of self-pity or an excess of explanation. I was moved by Strauss’ very vulnerable honesty and impressed how he so gracefully lead me into his painful world of functional isolation. Inside his head runs a daily, aching narrative of Celine as a young girl and who she would’ve become as an adult. It doesn’t begin to dissipate until the author meets and marries his practical wife, who acknowledges the incident and its effect on Strauss with the right level and rhythm of support he’s needed but never had.  In the end, there is a lifting of the burden, and Strauss’ writes about it with a hope that is not only his but also ours for what his story teaches us about forgiveness.

Half a Life won the 2011 National Book Critics Circle Award for autobiography.