Kirkus Reviews recently posted a list of 2011 Outstanding Debuts between January and June. Most are starred, which for Kirkus means “books of remarkable merit.” But for those without the star, how does one interpret them being outstanding but not remarkable? Hmmmm. You can see the full list of 12 books online. It’s an even six fiction, six non-fiction. Below are two novels from that list, coming up in April, that caught my attention.

In Zanesville by Jo Ann Beard
In 1998, Beard published a successful autobiographical essay collection, The Boys of My Youth. It experienced a unique release, selling out its first printing before the book’s publication date. I’m assuming that’s because of pre-orders via online sellers. One of the essays was published in 1996 in The New Yorker, The Fourth State of Matter, and is considered to have launched her upward rise. Now Beard’s much anticipated novel is here, In Zanesville. It’s a coming-of-age story in the 1970s narrated by a 14-year-old heading into her freshman year in high school. Publisher’s Weekly writes, “Beard is a faultless chronicler of the young and hopeful; readers couldn’t ask for a better guide for a trip through the wilds of adolescence.” The location is suppose to represent small-town USA, but I can’t help but think it’s Zanesville, Ohio. I just can’t find confirmation of that. 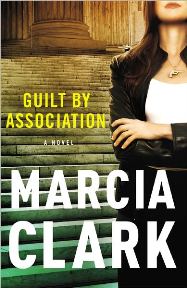 Guilt by Association by Marcia Clark
I’m having a hard time thinking of Marcia Clark as a novelist because I was glued to the O.J. Simpson trial in 1995. She’s a fixed visual in my memory with that cold determination on her face under a mop of curly hair. I realize I’m unfairly engaging in incident identification of a person. (I would struggle similarly if Monica Lewinsky became a romance novelist.) Nevertheless, Kirkus is raving about this debut novel by Clark in such a way it’s hard to think of not reading it. They praise the authenticity of Guilt by Association as well as the quality of writing. Two women are at the forefront of the criminal investigation in the roles of prosecutor and LAPD detective.