Here’s a fun, new book. The Girl in the Song: The True Stories Behind 50 Rock Classics is an entertaining short compendium of the stories about girls who inspired some of classic rock’s most memorable songs.

Organized alphabetically by song, each of the 50 entries entices with a quick-hit glimpse into the creative power of rock ‘n’ roll relationships and a go-back predominately to the 1960s and 1970s. The “lite” narratives avoid heavy analysis (just the facts, thank you) and include a perfect balance of quotes and photos as they reveal the girls who crossed paths with or loved or married or rejected such rock musicians as Eric Clapton, Paul McCartney, Sting, Bono, Phil Collins, Mick Jagger and James Taylor.

Most of the relationships are short-lived. A famous exception is Bono’s marriage to teenage sweetheart Alison Stewart. (They’re still married.)  Bono wrote U2’s “Sweetest Thing” as a present for Alison when he forgot her birthday while working on The Joshua Tree album.

Traffic Warden (i.e. Meter Maid) Meta Davies inspired The Beatles “Lovely Rita” after she ticketed Paul McCartney’s parked car. It’s interesting to read about how the song morphed into a lighthearted lampoon that replaced McCartney’s original idea to go negative.  Another song founded in anger is “Every Breath You Take” by The Police, often mistaken for a song of devotion. According to the book, Gordon Sumner, a.k.a. Sting, lead singer for The Police at the time, told BBC Radio 2, “I think the song is very, very sinister and ugly and people have misinterpreted it as being a gentle, little love song.” His ex-wife is the girl behind that song.

I jumped around, reading out of sequence, sometimes browsing the 144 pages like a catalog. I kept thinking, oh just one more, addictively fascinated by the easy prose and uncomplicated explanations about songs such as “Layla,” “Maggie May,” “Fire and Rain,” “It Ain’t Me Babe,” “Tiny Dancer” and “Uptown Girl,” to name a few. Also in the bunch, Steely Dan’s “Rikki Don’t Lose That Number,” inspired by author Rikki Ducornet. And here serendipity played a hand. The night after reading about the Steely Dan song, I went to an event at The Ohio State University’s Rare Books and Manuscripts Library showcasing recent acquisitions.  There on a table was a spread of Rikki Ducornet’s newly acquired books. See below. 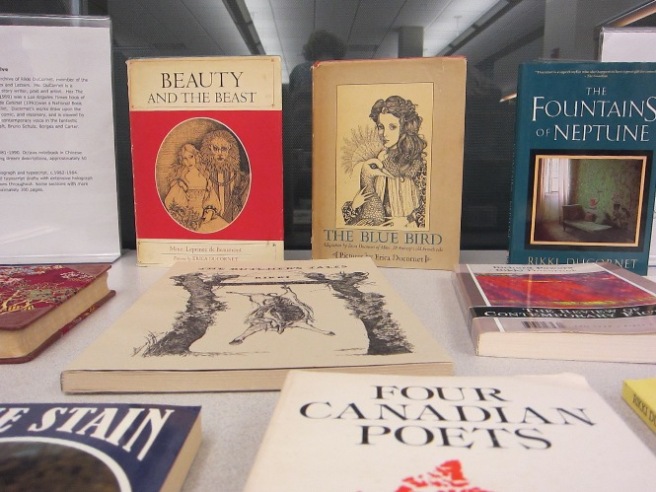