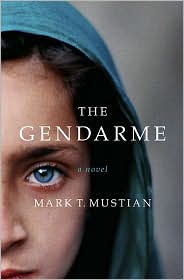 This dust-jacket photo should look familiar to TLC readers. It appeared a few weeks ago in a list of new books coming out in September in which I wrote of the book, “the plot portends an intriguing read.”  This fiction debut proves to be just that. It’s an unusual story about the deportation of Armenians from Turkey in 1915, engaging us with a strong narrative voice, rich historic settings, foreboding tragedy and troubled relationships.

The narrator and protagonist are 92-year-old Emmett Con, who participated in that inhumane event as a teen-aged gendarme in the Ottoman army, herding thousands of Armenians across the desert toward Aleppo, Syria, in what today is often referred to as the first modern genocide. Starvation, disease, rape and murder took place during the forced march  intended to rid Turkey of an ethnic group the Turkish government feared would revolt and demand autonomy.

But Emmett has long been deprived of his past. A head injury during World War I took away his memory and landed him in a London hospital in 1917. There he met his American wife. She brought him to the United States, where Ahmet Kahn became Emmett Conn, working in various trades and raising a family. Now, 72 years later, his life changes dramatically with the onset of a brain tumor that brings back the forgotten past in vivid dreams.

Author Mark T. Mustian moves the story between present and past with seamless dexterity and impressive characterization of Conn the old man and Kahn the younger man. The former entertains loose thoughts, unpredictable actions and surly reproaches toward family and friends, and they ring as true as that of any 92-year-old that broods, mopes and acts like a child. The latter is of a more cruel nature, guarding the Armenians with indifference, until he’s attracted to an Armenian girl with one light eye and one dark eye. Their relationship  creates tension in the story, as Ahmet struggles between loyalty to the army and his desire to win the girl’s respect.

Symptoms of the tumor erratically drop Emmett into sleep, as well as seize him with behaviors that react to the dreams. These alarm his daughter, who admits him to a psych facility for observation and medication. Emmett, however, fights to stay connected to the dreams and his past. Eventually, shame and regret from the wartime horrors he witnessed and participated in weigh heavy on his conscience and drive him toward finding forgiveness.

The resolution of the two stories, coming together in the end, is the weakest part of the novel, told with less realism than the powerful story before it. It’s a small matter, though, because Emmett, by this point, has captured us with his surrender to an overwhelming, unimaginable past and his hope for renewal. He’s the kind of character you remember long after his story has been told.

One thought on “This debut tells a remarkable story”