J. R. Ackerley’s 1956 memoir about his relationship with a German shepherd holds a solid place in classic dog literature, but that doesn’t mean My Dog Tulip is loved by all readers.  Some find the focus on Tulip’s common bodily functions disgusting.  Now the story is an animated film. 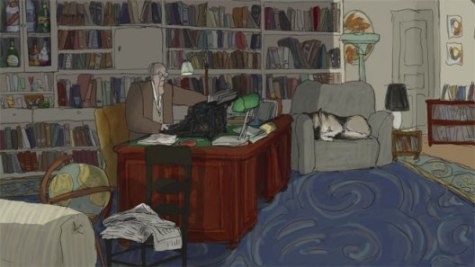 If you’ve not read My Dog Tulip, be forewarned. It’s a far cry from the emotional heart-warmers Marley & Me and The Art of Racing in the Rain. More Cesar Millan territory, Ackerley’s approach is not one of pampering with treats and toys but acknowledging and respecting the canine’s God-given nature.  No stories here about adorable antics and a canine’s life truths.

The first part of the memoir gives studied consideration to Tulip’s bathroom habits, as Ackerley tries to understand social urination and a dog’s needs. (“Dogs read the world through their noses and write their history in urine,” Ackerley writes.) And then the rest of the book — the majority — focuses on finding Tulip a husband and the timing and anxieties of coupling two dogs. You’ll never wonder again what happens when a bitch goes into heat.

Written by a British literary man mid-20th Century, the prose is gentle and proper, dotted with the occaisonal “hitherto” and lacking contracted words.

I was at first surprised, then unsettled and finally won over by this recollection of a lonely bachelor who unexpectedly finds himself the owner of an 18-month-old female Alsatian bitch, as he refers to Tulip, overwhelming his life with chaos and devotion. Ackerley’s story demonstrates how he loved Tulip by allowing her a dog’s life in the framework of a man’s world. He takes to heart what his vet tells him: “Dogs aren’t difficult to understand. One has to put oneself in their position.” 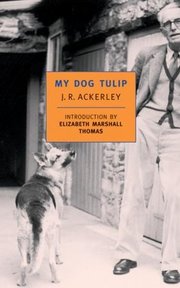 Boring? Disgusting?  Only if you ignore the author’s intention. When I realized there would be no drama and no emotional tug from a dog’s unconditional love, I surrendered to the essence of Ackerley’s relationship with Tulip and experienced the book’s perfection. If “one has to put oneself in their position,” then one needs to open up to the significant role bodily functions play in dogs’ lives — functions we control so the dogs fit better into our human lives. We spay and neuter, pick up the pooh, designate appropriate pee spots and yank them along on a leash when they spend too much time sniffing.  Love it or loathe it, My Dog Tulip asks us to consider whether or not it’s right to impose human standards of conduct on a dog.

The San Francisco Film Festival website says, “Perhaps the greatest accomplishment of the animated film ‘My Dog Tulip’ is that people who don’t consider themselves dog people are irresistibly drawn to it.” Given the reaction to the book, I’m betting not everyone will have such positive feedback.

The official promotional movie trailer is delightful, but I also recommend watching the San Francisco Film Festival movie trailer. It’s a true reflection of the book’s subject matter, illustrating social urination. (Tulip’s interaction with horse dung is hilarious.) Click on the preceding linked words in this paragraph to access the individual trailers.

For a peek at how the film was created, check out this YouTube segment about the creators.