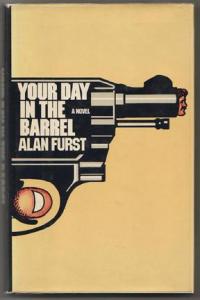 For a little more than 20 years, Alan Furst has been spinning irresistible espionage set in Europe’s dark time leading up to and including World War II.  He’s considered a master at combining history, politics, espionage and romance in a spellbinding style that drops you into the moment. But Alan Furst hasn’t always been a big hit. His first novel published in 1976, Your Day in the Barrel, is a comic murder mystery, which  he followed with two more of similar theme in 1980 and 1981. You won’t find these three embarrassments listed under “books by Alan Furst,” though. In remarks about them to The New York Times, Furst said, “All I was doing was showing how smart I was.”

Next came Shadow Trade in 1983, a contemporary spy thriller that transitioned Furst to Night Soldiers (1988), the first of his historical WWII spy fiction for which he’s now known. But Night Soldiers and, next, Dark Star (1991) didn’t skyrocket his popularity and sales, either, although a cult following sprouted around them and grew.  With each successive book about espionage set during what’s become Furst’s signature historical time, more and more readers came on board. Now when he publishes a new book, it hits the best-seller list, including this summer’s Spies of the Balkans.

Spies of the Balkans takes place in northern Greece close to the borders of Bulgaria and Turkey. It is 1940 and Mussolini and Hitler are eagerly looking to add Greece to their empires. The book opens with the protagonist, special police agent Costa Zannis, chasing a German spy. When captured, the German’s briefcase reveals photographs of the Greek-Bulgarian border. What follows is the usual suspenseful plotline set in the WWII dark time of uncertainty with history’s people and events expertly threaded through the scenes and a complicating romance hanging in the background. Zannis collaborates with a Jewish woman in Berlin, married to a high-ranking protestant Nazi, in setting up an escape route through Austria, Hungary and the Balkans to Greece and a safe exit to Turkey. He also gets involved with the British in moving an important RAF pilot out of Nazi-occupied Paris in a series of unforgettable, harrowing scenes. This is the good stuff  fans rely on, that Furst consistently delivers.

If espionage captures you and Spies of the Balkans is your first Furst, you’ll come away wanting more, which you can satisfy with the 10 previous novels in the series. You can get  a complete list with plot summaries on Alan Furst’s website, under About the Books. Regarding those beginning novels Furst would rather ignore, they’re no longer in print yet fetch a nice penny in the collectibles market, with a signed first edition of Your Day in the Barrel commanding between $500 and $1,000.

3 thoughts on “Alan Furst’s new day in the barrel”