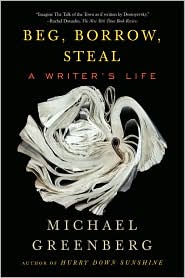 Yesterday, I finished reading Michael Greenberg’s new book, Beg, Borrow, Steal: A Writer’s Life, published by Other Press. It’s a collection of his columns that have appeared in the Times Literary Supplement from 2003 to 2009.

Compilations like these — a gathering of career work — don’t tend to impress me. They can be dated in relevance and have the taste of leftovers, something that had more vitality in its original, fresh presentation. I also have had my fill of writers’ expositions about their trade.

Nevertheless, having read Greenberg’s excellent Hurry Down Sunshine, the memoir of his daughter’s “crack up” (as he refers to her psychotic episode), I knew he had the talent to be different with this kind of book. Greenberg’s got an edgy individualism that came through in the memoir. Indeed, as I learned in Beg, Borrow, Steal, when Greenberg was 15 years old, his father told him he had more guts than common sense.

My instinct proved correct: This is a delightful journey through a well-lived life in New York City. The 44 chapters-once-columns stand alone and yet, pulled together, flow like a river of many surprises. They are about a writer’s life — not the trade, as I mistakenly assumed — vivid anecdotes extracted from the jobs, friends and family, let alone the unexpected, in his native New York.

Speaking of jobs, from the moment he decided to be a writer (and not go into the family scrap metal business), Greenberg vowed to be his own boss. He’s worked as a street vendor, chauffeur, waiter, interpreter, ghost writer and cab driver, among other money-earning ventures that allowed him time to write.

The chapters are short, up to 5 pages each, and loud with wit, wisdom and irony. Many are simply perfect. All are rooted in his native New York. My favorite is #12, “Notes of an Anti-Traveler.” Greenberg chronicles his daily commute as a joke on himself, “an attempt to make a virtue of the fact that I hadn’t ventured more than fifty miles from New York City in almost a decade.” What he discovers is the happy intensity of being still. For that, Mr. Greenberg, I thank you.

On his website, Greenberg provides a clever interactive map of his New York, with original fine art and selected excerpts.